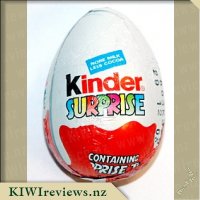 Price:
From $1.99
Available:
All leading stores and supermarkets

Since 1974, Kinder Surprise has delighted millions of children with a revolutionary idea. By combining a chocolate egg, a surprise, and a toy, a fun and entertaining world for children was created, while at the same time, delivering parents a reassuring and emotional experience. Since its launch, nearly 30 billion eggs have been sold all over the world with more than 8,000 different surprises!

In fact, nearly every year more than 100 new toys and gadgets are featured, which not only stimulate imagination and creativity, but also accompany and aid in a child's growth and development. All Kinder Surprise toys are designed and developed with safety in mind, rigorously observing international regulations as well as extra safety criteria voluntarily adopted by the Ferrero Group.

My daughter loves Kinder Surprises and always seems to want one every time we go to the supermarket often asking for her "Easter egg", I tried to do the trick of saying that they didn't have them once we arrived at the supermarket but now she scans the isles near the checkouts until she pinpoints them from a mile away.

Kinder Surprises are a chocolate egg which targets children, the chocolate egg consists of milk chocolate on one side and a milky white chocolate shell on the other side, the eggs are wrapped in a tinfoil like wrapper which has bright, bold writing being egg shaped these are easy to spot down the checkout lanes amongst all of the other lollies and chocolates. My daughter and other children alike really like these due to the surprise toy that is inside the egg. The toy is safely protected inside a plastic egg inside the chocolate egg. When I was younger I remember the toys being not to bad, and often one that you had to piece together yourself such as an animal or similar. However these days the toy quality is rather cheap and shocking the last few items my daughter has got in her eggs consist of a piece of paper that unfolds which you stick animal stickers on, a ring and a couple of beads with instructions to make a necklace (though no string was included). Luckily being young this still excites her getting a Kinder Surprise is definetely about the toy for her rather than the chocolate although she still enjoys this.

The chocolate is creamy and smooth and I really like the taste of it and is said to contain more milk and less cocoa than other chocolate. For the price you pay for the egg, I would much prefer to pay the same price to buy a Kinder chocolate stick which tastes just like the egg but has a lot more chocolate to it.

A great little treat for children, but not worth paying more than $2 for in my opinion.

Hellers once again handed over the reins to the New Zealand public and encouraged people to dream up their ultimate idea for a new sausage flavour. The 'Sticky Ginger Beef' - a combination of ginger, onions, garlic, coriander, soy sauce and brown sugar was picked out of more than 2,500 entries. It's Hellers first Asian inspired gourmet sausage.

How to Cook
Hellers Sticky Ginger Beef sausage is best cooked by frying, grilling or barbecuing on a medium heat turning often until the outside is golden brown. Juices should run clear.