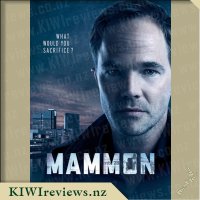 This bleak, tense Norwegian thriller pits brother against brother in the brutal worlds of politics, media and high finance.

Peter Veras is an uncompromising journalist who works for Norway's most respected newspaper. In a dense, multi-layered storyline reminiscent of 'All The Presidents Men', Veras uncovers evidence of financial fraud involving the country's political and financial elite - evidence that surprisingly points to his own brother.

Veras makes the fatal decisions to pursue the story, which tragically leads to his brother's suicide. Veras then turns his attention to the anonymous tip that sparked the mystery, only to discover that the source was his brother himself. Bewildered and grief-stricken, Veras presses on but the closer he gets to the truth, the more dangerous it becomes for him and his family. First things first. This is a norwegian show. It never occurred to me when I requested this item to review, but there is no English dubbed audio track. If you don't speak Norwegian, then be aware that the only way you will be able to follow this is with the subtitles. I'll repeat that again; NO ENGLISH AUDIO, ONLY SUBTITLES.

Now this really made it very apparent to me, how often I can get distracted, or momentarily pay attention to other things; like a flatmate talking to me, or someone knocking at the door. As I don't understand Norwegian, if I wasn't looking at the screen, I missed a critical piece of dialogue integral to the plot. So full concentration is advised.

But ignoring my whole issue with the language barrier, I loved this series. It reminded me of 'House of Cards' taken from the viewpoint of the journalists. This series is quite suspenseful. Every event unfolds a little bit more of the storyline; not all pieces are linked, some pieces are never exposed, and other pieces aren't relevant. but it all adds to the tension, when you don't know who is involved, how many people are involved, or even why, or when it all started.

It started off very slow, and I really wasn't too sure what was going on. It may have been getting used to reading the subtitles and trying to combine that with the emotions conveyed by the person speaking, or it may have just been the fact that nothing had been revealed yet. But the first episode provides your primary characters, and at the end provides the hook that makes you come back for the next episode.

From my experience at watching TV, I have to say the plot in Mammon is very much original. I had no idea at any point where the story was going. Everything that seems odd had a reason for happening. You never know if you are at the end, because every time you get close, something else comes forward. It's intense!

Visually, it's well done. It has a bit of a blue tone to it (not as bad as 'Cold Case'), which gives it a real gritty, crime feel. A must watch for anyone who enjoys politics, crime, mystery, or drama. There's even stuff in there for those that love a thriller.

The gang's all back for yet another season of this popular CBS sitcom, centered on Ted Mosby's (Josh Radnor) hilarious accounts of single life and his search for the eventual mother of his two children. The Emmy Award-winning series also stars Golden Globe nominee Neil Patrick Harris as Ted's womanizing pal Barney, Jason Segel as his best friend, Marshall, and Alyson Hannigan as Marshall's longtime girlfriend, Lily.