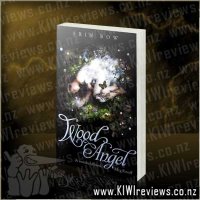 Plain Kate lives in a time afraid of magic. She has a gift for carving 'lucky' wooden-charms. Known as Witch-Blade, her unusual gift attracts dangerous attention in a place where witches are burned.

When her village falls on bad times, suspicion falls on Kate. Scared for her life, she seeks the help of a mysterious stranger. In exchange for her shadow, the stranger will assist her, but Kate becomes part of a terrifying plan, darker than she ever dreamed.

"Wood Angel" is a slow, meandering tale of a young girl left alone in the world with a gift that makes her stand out dangerously in a time when witches are regularly burned to death. While still an enjoyable read, this story never really seems to pick up speed... it just continues on its own quiet little way - until right at the very end!

The characters are a little on the shallow side, yet still interesting enough to get caught up in their story. The strange and creepy Linay is definitely dangerous, but it's hard not to feel some pity for him once you learn WHY he's doing what he's doing. "Plain Kate" has a quiet, reserved kind of strength to her that does come across a bit on the wishy-washy side occasionally, but her desire to belong keeps her going, even through the times where it seems everyone is against her. There's also the superstitious, gypsy-like Roamers who show Plain Kate what it's like to belong... for a little while anyway.

And then there's Taggle, my favourite character of the whole book! Erin Bow certainly captured the feline arrogance and sense of superiority perfectly in this furry character's personality. You never knew whether he was going to help his friend or make the situation worse! Taggle was definitely the star of the show for me, and an essential part of what kept me reading as the descriptions in general were rather on the bland side, the dialogue was shallow and not particularly revealing, and the plot nowhere near as interesting as I was expecting from reading the blurb on the back cover.

A reasonably simple story, without any really unexpected twists and turns to the plot and barely any fast paced action, Wood Angel would suit children aged maybe 12 and up, and even a few young-at-heart adults who like a more sedate fantasy read. Not one I'd recommend grabbing though if you like a light-hearted story as it has quite a dark, gloomy feel to it right the way through. Overall, I enjoyed the book, but not one I'd want to reread and not an author I'll be keeping an eye out for in the future.

Dark seems an appropriate word to describe 'Wood Angel'. The story of a Plain Kate, a girl with the stubbornness to do what it takes to survive, Erin Bow's debut novel is grounded in a fantasy version of the dark ages, with witches and burnings, gypsies, ghosts and revenge.

From the outset, things did not go well for Kate. Her looks and skill as a carver marked her as different, and after her father's death, life became a daily struggle for survival. When a witch coerced her into exchanging her shadow for her heart's desire, things seemed to improve, but then they proceeded to spiral downwards even further.

I was captivated by this story and read it in one sitting, all the time hoping for Kate to find a break, fall in love, or at very least escape the vortex of bad luck she seemed to be stuck inside. Emotional to the point of heart-wrenching, the author certainly made me care about her characters. I could feel the personal pain she had poured into the writing of this novel - evidenced in her dedication to the young sister she had recently lost.

Not really a story for young children as it is unflinching in its description of the death and destruction encountered along the way, but perhaps of interest to teens as a vivid experience of why the dark ages were considered so very dark.