ProdID: 647 - Pirates of the Caribbean - The Lost Disc
Directed by Gore Verbinski 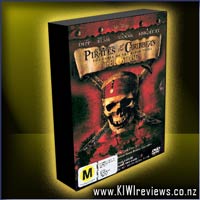 Pirates of the Caribbean - The Lost Disc product reviews

Just when the Black Pearl had sailed proudly towards the sunset - the tide, it seems, has turned. Legend now tells of a lost disc.

A buried treasure brimming with bonus material that has never seen the light of day. Untold stories, macabre mysteries. But this booty is not without peril - for there is another curse ready to befall those who would plunder these riches. A heinous hex we've chosen to ignore so you can enjoy this rare bounty.

I saw the movie on the bigscreen when it first came out and it really blew me away. the special effects were second to none and the storyline had everything a regular moviegoer could want. action, romance, special fx, humour both slapstick and intellectual, and a very hot lead actress to top it off. I can imagine the ladies out there would say a hot lead actor instead, since Orlando Bloom is apparently quite a dish. I was really happy when I was offered this boxed set to review and found myself once again lost to the spell of The Pirates even though the screen was a mere 21" this time. It's amazing what a difference a good speaker package will make. The bonus bonus disc (yes, that is right, there are *2* bonus discs in this pack!) contains some wonderful extras. I was really taken with the "Becoming..." clips, as they showed me really clearly what actors will go through to make the good characters into great ones. Geoffrey Rush really puts everything into bringing Captain Barbossa to life (if you pardon the pun), and Johnny Depp just seems to become Captain Jack Sparrow so naturally. His talent is natural and so much a part of him its stunnning. Having been to the Disney attraction as a kid many years ago, it was interesting to see how much it has progressed. This 3rd disc makes it worth buying really. The movie is great, the bonus disc is full of goodies, and the bonus bonus disc is just the cherry on top. If you like good movies, you will LOVE this one.

Score: 6.5
Product reviews for listing 4204: House at the End of the Street -  Directed by Mark Tonderai

A mother and daughter move to a new town and find themselves living next door to a house where a young girl murdered her parents. When the daughter befriends the surviving son, she learns the story is far from over.