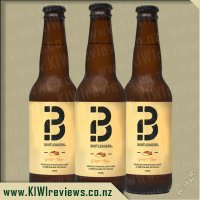 Discover the bite and savour the lingering finish. Bootleggers Ginger Beer, handcrafted with the utmost attention to detail and delicacy in flavour, offers a rewarding, lingering finish that's generous on the ginger. Once again, New Zealand shows Australia how it's done.

I do love ginger beer and like to drink it if say I am a sober driver at a party as it is a little bit more like you are having a classy drink. So when I received this bottle I was impressed the bottle itself does look more like a adults drink so it has a level of sophistication to it which I really liked. The bottle itself sort of reminded me of a upmarket beer bottle so wouldn't look out of place in a nice beer bar.

In the past I have mainly drunk bundaberg ginger beer but have tried other varities where you can see the bits floating in the bottle which I have really enjoyed. I am a big fan of ginger so love the strong taste although home brewed ginger beer is less than appealing to me. When I opened this the smell of ginger hit me straight away it certainly smelt like a traditional ginger beer and I was excited to try it for the first time.

I drank straight from the bottle so I could get the most of the flavour and unfortunately it wasnt a flavour for me. To me it was a little too weak in flavour and was very watery so I wasn't too fond of it. In saying that I did like that it was only lightly carbonated so you didn't get overwhelmed with the fizz. I did finish the bottle however it is probably not something I would buy again for myself.

If you like a mellow home made type of drink then this ginger beer is definitely for you!

I do enjoy a good ginger beer. This one fell below my expectations, however. I prefer drinks with a strong flavour. While this Bootleggers variety had a nice level of carbonation (not too fizzy), the flavour was lacking and what flavour there was was rather mellow, most of the flavour sat more with the aftertaste than the main part of the drink.

The tall brown bottle and simple label design is aesthetically pleasing, and reminiscent of more 'adult" beverages, making this a good non-alcoholic choice of beverage, considering the very good retail price. This beverage also has a comparatively low sugar composition for this style of drink, which is good, making it a beneficial mixer for alcoholic beverages. Not quite the best as a standalone drink.

I drank the entire portion in one sitting, but I really didn't consider it to be anything spectacular. While I would consider it for mixing with some whisky or cocktails, I wouldn't look at this as a drink to have on its own.

There rally isn't much else that I can say about this beverage. It was very average in my opinion. It was neither bad, nor great. It only served as a fluid to drink, and didn't really strike me as something that I enjoy enough to go out of my way to buy again (unless I was after some low sugar mixers for mixing...)

I enjoy ginger beer was a drink option when I am having a sober night. I often take whatever is in the fridge at the bar, but it is usually one brand. While I drink it, I do often find all ginger beers to be a little too gingery, a little too sweet and a lot too bubbly for me. I like sodas but I often find the bubbles hurt when drank at any speed.

I opened this ginger beer tonight. The smell of the ginger was yummy, and I had a little drink of it just straight. I immediately really liked it. It is supposed to be a bit more delicate and it is. It's no where near as sweet as my normal one and it was less bubbly, which was awesome. I really am the person who drinks the flat soft drink left over after a party.

After the first taster of the ginger beer, I then made a wee cocktail with the rest. I added a generous shake of coconut sugar, a shot of good quality gin and the ginger beer. The coconut sugar added a good flavour, without adding too much sweetness. The gin gave the soda a nice little citrusy kick. So the overall effect was so delicious. It almost tasted like a ginger jelly bean.

I had tasted this another time, at a restaurant. My friend bought a bottle of it and let me and my youngest daughter have a taste. I enjoyed the first taste as did my youngest girl. She tried to steal the bottle off my friend. My friend was really impressed with the flavour and we proceeded to buy every Bootlegger drink on the menu to taste test. I was so pleased to get another taste and to try it in a less virgin styling.

This flavour and the drink I made, is really good. I would absolutely buy this in a four pack so I could have this as a night cap additive. It's not much dearer at a supermarket pricing, compared to other sodas I already purchase on a weekly basis.

We often have ginger beer in our fridge for the times when we feel like something special to drink in the evenings. It is a great non-alcoholic drink which is a bit more fun than standard fizzy drinks. I am a bit fussy with the ginger beers that I will drink and I have generally settled on a single brand that I like. Although this is the case, I am always willing to try other brands, but they have to compete with my favourite one!

I found that the bottle was classy and looked a bit more like an 'adult' drink than the my usual brand. When I went to open it, I noticed that it had a cap on it. I gave it a little twist and it opened easily. It wasn't that obvious to me whether it was a twist top or one which requires a bottle opener. I must say that it was really easy and smooth to open with my bare hands. Often such caps are harder on the hand.

I smelled the drink to see what it was like. It seemed to have the same smell as my preferred ginger beer. When I had my first taste, I felt that it had a weak flavour and was much more watery in flavour than my usual drink. There weren't that many bubbles either and I think it was a little flat for my liking.

There is always a bit of give and take when it comes to products with less sugar than the ones we might prefer. I found that my preferred brand had 10.8g of sugar per 100g and the Bootleggers one only has 7.2g per 100g. Perhaps the reason that I found that there wasn't as much flavour in this drink was because my tastebuds expect more sugar in such a drink. The other thing to note is that unlike other fizzy drinks, this one has limited and simple ingredients, similar to what one might use to create ginger beer at home. This has got to be better than unnecessary additives.

I would be unlikely to purchase this drink again, although I do like the natural ingredients and reduced amount of sugar in it.

I love ginger beer. As a teetotaler ginger beer is my beverage of choice for social events and as a special treat. Over the years I have tried lots of different brands and have my favourites so much so that when I order a ginger beer at a bar or cafe I always ask what brand they have. I had never heard of Bootleggers Ginger Beer (or any of their other beverages) until I was offered it to review for KIWIreviews. I was keen to try it and see how it measured up.

As I like my ginger beer cold and I didn't want to dilute it with ice I put it in the fridge to chill overnight. My daughters saw that I had some ginger beer and wanted to have it. Thankfully my husband had stocked up on some cheap ginger beer so I didn't have to share my Bootleggers with them. When I sat done to savour the Bootleggers I looked at the top and groaned. Surely I didn't have to get out of my comfy sofa to search for a bottle opener. Thankfully a bottle opener wasn't required as although it didn't look like it, it was indeed a twist top.

The ginger beer had a milder taste than I normally had and less fizz but I enjoyed it none the less. It was more like a flavoured soda. I thought the serving size was perfect for me. If this was the ginger beer available while I was out I would happily buy it. $2.50 is very reasonable for a boutique brew and much cheaper than many cafes sell some of the mass produced brands. It also helps that the brand name makes me feel like I am being a little naughty. After trying this I am keen to try some of the other Bootleggers products.

The name says it all - another delicious flavour in our premium hot chocolate range.