« The X-Files: Season One review 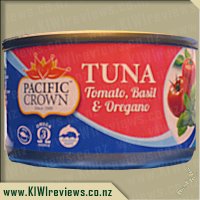 Disclosure StatementFULL DISCLOSURE: A number of units of this product have, at some time, been supplied to KIWIreviews by Pacific Crown or their agents for the purposes of unbiased, independent reviews. No fee was accepted by KIWIreviews or the reviewers themselves - these are genuine, unpaid consumer reviews.
Available:
at selected quality supermarkets

Delicate pieces of premium tuna combined with a blend of tomato, basil and oregano. This makes a delicious meal when heated and served over rice, noodles or mixed in with pasta.

I have only been back in NZ for a couple of months now, and after spending nearly 3 years travelling through the poorer regions of Asia and India doing Missionary service, I have acquired a real taste for hot, spicy food. Something this mild is a flavour I would have really enjoyed before I left, but now I find it too mild and harder to appreciate. My flatmate on the other hand thought it was one of the best had has tasted, and said he would heat it up and mix it through some penne pasta as a quick mid-afternoon snack for two or a meal for one.

Even though this was not one of my favourites in the range I have tried so far, it is one I may get again in future. I imagine it could be a good ingredient for making quick 1 or 2 serve mini pizzas with pita breads or wraps, or even for use in home made sushi with some pickled radish, carrot sticks and maybe some garlic steamed asparagus spires. If you like milder flavours, you could try it on toast with some grilled cheese on top like I did. It was too mild for me, but it could be just the flavour for you.

I decided that I'd try this tuna for lunch today with water crackers. I opened the tuna and the immediate smell was tomato and then basil, I noticed that I could see the were tomato bits in the tuna, as well as herbs and onions and very minimal oil, which was great. I spooned the tuna onto my crackers as I ate them, the tuna was a very nice consistency with nice small bits of tuna making it easily spread. The tuna has a really nice taste of tomatoes and herbs, especially the basil.

I liked that the can is an easy peel open can which is the same size as other snack tuna cans on the market. The colouring on the can is quite red which makes the buyer think of tomatoes, and the artwork of big juicy looking tomatoes makes the can very appealing to the eye.

I would definitely recommend buying this tuna, it is very versatile meal or snack option. Next time I buy this tuna I intend to use it as a filling in a salad sandwich for lunch in a nice grainy bread. Another option would be in a salad or even a pizza topping.

I like tinned tuna, it is a very handy and very quick way to get me some fish in my diet without asking my wife to cook fish for me or have to learn how to cook fish myself. I've had a couple of other brands of this flavor and I would have to say this this is one of the nicer brands out of them all. The packaging is nice and I love that it says it is 'dolphin safe' which is important to me and I like that it is wild caught and not some nasty farm.

I knew that I needed to review this and it just so happened that my kids were coming down to have a little snack before the went to bed, so I offered them each a little taste of it. My five year old tried a bit and promptly ran and spat it out, so I didn't bother trying to give her anymore. My seven year old had some and promptly asked for more whilst my four year also liked it. After about three spoonfuls of it I put some on a cracker "wow, that's a good idea mum" claimed the seven year old who had four crackers this way, my four year old had one that way too.

In the end I didn't get much of the tuna but finding one that my son loves is worth it, I enjoyed this as well and will be buying it in the future without a doubt.

Tuna is one of those go to things for me I always have a tin or two in the cupboard because there is so much you can do with it, I love the cans of flavored tuna as they work well even as a quick and easy snack with a few crackers.

When I got a tin to review I decided to keep it simple and try it without adding lots of extra to it. So it was tuna on toast for lunch. Opening the tin I was pleased to see there wasn't too much oil in it nothing worse than finding half a can of oil to drain off before digging in. Digging in to my toast I was impressed it had a lovely flavor to it, not too over powering but the perfect balance.I was also pleased it didn't have an oily taste like lots of tunas do. I had a little leftover after my toast so gave it the cracker test which got my seal of approval as well.

In the shopping this week I added a few cans in so I could try one of my favorite quick and easy dishes, boil up some pasta and throw a couple of cans of tuna threw. I always make a little extra because it's always just as tasty cold the next day for lunch. I'm pleased to say it got the pasta seal of approval too and sadly there is none left for lunch tomorrow because the husband enjoyed it so much he went back for seconds. I will buying it again for sure!

I recently found myself with an unusual collection of products to play with, and was wondering about what to do... I had 'slider' buns (like the mini rolls from KFC, only not steamed), pre-sliced shiitake mushrooms, this can of flavoured tuna, and an assortment of other things unrelated to this review. I also have a potted herb garden outside, so fresh herbs were also available. I decided to make some snack sliders and see how they went.

So, splitting open some of the slider buns, I gave each of them a generous squirt of Aioli, popped some of the shiitake mushroom slices and a few freshly picked sweet basil leaves on, then topped them with a heaped teaspoon of this tuna. Despite my usual ambivalence towards fungii of any kind, these were quite nice as snacks, and were appreciated by most of my family. (The youngest is not a fan of aioli, but we was at least willing to try a bite of one made with tomato sauce instead.)

To give the tuna a fair trial, I also made a couple of 'bare buns' with just the tuna - no aioli or other ingredients that may drown out the flavours - and I was pleased to find the flavour was clean on the bare buns, but also detectable in the filled sliders. This lead on to a little more experimentation, but because these are quite small tins there wasn't a lot left to do much with... so I went out and bought a couple of extra cans. Nuking up a packet of 2min microwave instant rice (Uncle Ben's Golden Vegetable was the best variant for this, I found), I topped it with two cans of this tuna, mixed them loosely together and served up portions for two. Affordable meal, and quite tasty too.

Overall, though not the most flavoursome canned tuna I have ever tasted, it is quite versatile I think, and would be handy to have for stirring through 2min noodles for a kids snack, or over a small portion of freshly-cooked pasta with some fresh basil, oregano and thyme mixed through to make an instant Pasta con Salsa di Pesce.

I love tuna but I am not very adventurous about trying different flavours so thought this would be a great way to try something different. The other thing I really liked was that the tuna is caught using dolphin friendly methods.

One of my favourite ways to have tuna is stirred through pasta and with my son asking could we eat the tuna today, I thought a good lunch would be a pasta and sauce with tuna added. I opened the tin and saw that there was not a lot of oil in the tin which I liked and it broke apart real easy when I was stirring it into the pasta so we didn't end up with large chunks of fish in the food. I took a small taste and found it absolutely delicious, the kids normally chat a bit while eating but today the only one who said anything was my youngest who is not a fan of fish as my other son and I were too busy enjoying our food.

I will be buying more of this tuna as I also like tuna with my toasted sandwich, will have tuna in salad and added to rice and this brand just tasted so much better. This particular flavour is good for the kids as my kids don't like a lot of spice and zing but I have a fondness for lemon pepper with my food so will be hoping to find a nice lemon pepper flavoured one just to have more choice in flavours.

The richness of cocoa and condensed milk creates a classic indulgent gooey sauce perfect for a traditional sundae. Choc Lovers Chocolate Sauce also doubles as a perfect syrup base for iced or hot chocolate... don't forget the marshmallows! This is a classic family favourite.