« The Magicians of Caprona review 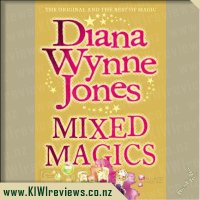 Paperback of the spellbinding new story collection, featuring Chrestomanci and many familiar friends and worlds from the novels. The titles are: Warlock at the Wheel, The Sage of Theare, Carol Oneir's Hundredth Dream and Stealer of Souls.

In "Mixed Magics" we get four short stories, Warlock at the Wheel in which Warlock drives away to flee Chrestomanci and gets bullied by toddler Jane and dog Towser, Stealer of Souls in which Neville Spiderman kidnaps jealous Cat Chant and homesick Tonino from dying Gabriel de Witt, Carol Oneir's Hundredth Dream in which dream subjects drunkenly object to typecast roles and The Sage of Theare where Great Zond and gods try to outwit prophecy of Dissolution and dump a troublesome babe in Chrestomanci's world.

There are some fun lines in this book, as I have come to expect from Chrestomanci, such as when he is sick and says "Can the gods catch flu? I think I may have given it to all of them. Find out and let me know, there's a good chap.", lines that had me laughing out loud back in 2002 and still have me laughing thirteen years later. Not every story hit the right note for me but it was fun to see some familiar faces rather than being dumped with someone new each and every time and the stories give more small tidbits into Chrestomanci's lives. I personally would love to see him brought to life, I can imagine him being played by Johnny Depp... :P

Join the rowdy alphabet squabble and find out. In Isaac Drought's delightful story, lowly letters learn to stand up to the loud ... more...