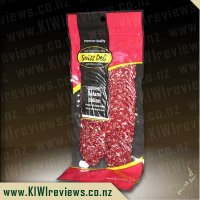 Disclosure StatementFULL DISCLOSURE: A number of units of this product have, at some time, been supplied to KIWIreviews by Swiss Deli or their agents for the purposes of unbiased, independent reviews. No fee was accepted by KIWIreviews or the reviewers themselves - these are genuine, unpaid consumer reviews.
Available:
at selected quality retailers and the factory shop

SWISS DELI® Italian Salami is prepared in the Italian manner using a unique blend of spices. Great as a snack and a must for those preparing an extra special pizza topping. Available in small (approximately 550 grams) or larger size (approximately 1 kilogram). Manufactured with finest quality pork and beef.

Both my husband and I like salami and enjoy every opportunity to test out new versions and see what we think. Being an Italian salami, the Swiss Deli Salami Italian was nice and mild and the kids loved it too. It had the leathery, chewy texture that I would expect out of this type of salami. I think that while it suited the kids and me, my husband would be better suited to something with a good amount of spice in it. I am not complaining as I was happy to enjoy more of it for myself. I did enjoy the salami but I could definitely handle something a bit stronger as well.

We tested the salami straight from the packet and I think that it is the best way to eat it. Although, it wouldn't hurt to put it on a platter with some nice cheese as well. I found that when I added it to toasted sandwiches or on top of muffin splits with a little cheese, the flavour of the salami wasn't as good. I did find that it was better when I added a good serving of the salami to the toasted sandwich rather than being too stingy. I note that the front of the packet says "serve generously" and I think that it is vital if you are going to cook with it.

I see that a serving size is 50g and the packet that I had to review was 100g. We actually made it go much further than that because of the fact that the slices were so thin.

The fact that the product is gluten free is very handy for people who require this for their diet. It doesn't affect me or my family but I do know how important it is for some people.

We were lucky enough to be given some of this salami to review and it appealed to me instantly as it didn't proclaim to be overly spicy.... while I can handle a bit of spice, my husband and 6 year old wouldn't be so keen, and I love a family friendly salami.

We do eat salami occasionally, using it mainly on crackers and on pizza so those 2 things seemed to be the perfect place to start testing it out. Of course I started with a small taste test first and what I first noticed was that it seemed to be very oily between the fingers... in fact this was noticeable to me each time I took some out of the packet. As I normally don't buy pre-sliced salami, I don't know if this is normal, but I wondered if it was part of the preserving process.

The next thing I noticed is that for only 100 grams in weight (in my packet), it gave you a lot of slices as they were sliced nice and thin - something I find I can't do when I slice my own so this really appealed. In fact this packet has stretched to 2 pizzas over 2 nights, a few snacks on crackers and some sneaky snacking of it on it's own and I still have half a dozen slices left so I felt it went a long way. And the best thing is that the packet re-seals to be airtight each time.

Onto the taste, and I really enjoyed it - it had very little spice which suited our whole family, and in fact the only hint of spiciness that I noticed was as an after-taste and it was very mild. I wouldn't recommend this one if you like a good kick of spice that's for sure! Overall we all enjoyed this salami and it had great flavours and I'd happily buy it again. With the long shelf life I could save it up for those times when I would be looking for something extra special. Salami for us is never an everyday treat anyway so I happily pay a bit more for something good quality.

I have dentures and they make eating some foods really easy, and some foods not so easy. I liked the taste of this salami but I found it a bit hard to chew. People with their own teeth will have a different experience, because their teeth won't decide to suddenly jump ship or move around the way mine do.

I tried some of this straight out of the packet and it was too tough for my dentures. Not saying it was like leather, just that the dentures haven't sat right for a few years now and they have some movement to them when I eat chewy foods, and this was chewy enough to make them rub on my gums a bit too much for comfort.

My neighbour's son popped over after work to check up on me, he's a great young man, and he saw this on the kitchen bench while I was still trying to chew it. He asked for a slice and when he tried it he thought it was very tasty but also agreed it was a bit chewy. Instead, he suggested, it might be good chopped up fine on a piece of bread with a little of his father's tomato chutney, some cheese, and a quick spell under the grill, mini pizza style. After a quick stop next door he returned with his dad in tow and we all sat down to try it. he was right, this was very easy to eat when diced up into little bits.

We all agreed it would probably go well on a regular pizza too, with other ingredients, but also stirred through a creamy risotto. The young man was quick to thank me for allowing him to join us in the taste testing and promised to come back with some more, and cook us one of his favourite risotto dishes using this. I am counting the hours.

It all began in the USA in 1954 with a milkshake machine salesman named Ray Kroc. Ray received an order from the McDonald brothers' hamburger outlet in California. He was fascinated by their operation - the menu was simple and inexpensive but the hamburgers were good; the fries were made in-store; and the shakes were thicker than usual.

So Ray put a proposition to the McDonald's Brothers. "Let me open new McDonald's ... more...