« Doctor Who: The End of Time review 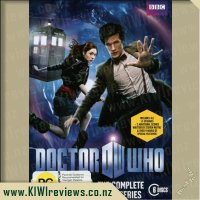 Matt Smith stars as the dynamic Eleventh Doctor in Doctor Who Series 5. After his explosive regeneration, the Doctor pulls himself from the wrecked TARDIS and comes face-to-face with the spirited Amy Pond. The new Doctor has just 20 minutes to save the world and only Amy to help him! As always, wherever the Doctor goes, his oldest enemies, the Daleks are never far behind. But they are not the only creatures the Doctor and Amy must face there are also alien vampires, humanoid reptiles and the Weeping Angels.

Episodes:
•  The Eleventh Hour
•  The Beast Below
•  Victory of the Daleks
•  The Time of Angels
•  Flesh and Stone
•  The Vampires of Venice
•  Amy's Choice
•  The Hungry Earth
•  Cold Blood
•  Vincent and the Doctor
•  The Lodger
•  The Pandorica Opens
•  The Big Bang

Season five gives us a new Doctor and a new companion all in one go.

We get to see cities on top of a space whale, an alien that forms a psychic connection with people and takes their image, the return of the mysterious River Song and the Weeping Angels in a fun two parter episode. Amy's Choice is a fun episode as we get to see two different versions, one where Amy and Rory have settled into a family life and one where their life is still the same. Vincent and the Doctor is a well done episode which has us meet Van Gogh and gives fans a bit of a history lesson, still giving us a deeply troubled artist.

The Pandorica is a good episode, shows how the Doctor doesn't really see himself, from the eyes of his enemies. They all say he is the oncoming storm, though of course without him the universe would have ended many many years ago. The Big Bang gives us a well thought out ending to the season. This season brings good growth to Amy's character and has some great moments between her and Rory, showing that time and space can't keep true love apart.

I thought that the way Amy was introduced was great, a bit unique and can't believe she had the patience to wait and then when the Doc finally gets back, she holds a grudge for a short while but gets over it. I have enjoyed the characters, really liked Amy but not that fussed with Matt Smith, he does a good job but just prefer David Tennant.

I like how River doesn't tell the spoilers and that she keeps playing a large part in the story and hints are dropped about what the future will bring.

I'm still watching but I know I could be enjoying it a lot more. There is a lot in history that would be good to be able to go and see first hand and the future we can only imagine. I'm not that sold on robots and monsters and space aliens but I know my boys are, they love the doctor and if asked to draw something then it is usually something Doctor Who related and are also playing games about Doctor Who (I have heard them discussing who can be the Doctor and who is Amy and why they can't swap over).

I'm finding that the storyline is getting a bit boring as a lot of the episodes are so similar. There are a few that are different and what is what keeps me watching and waiting to see what will happen to the Doctor.

The great thing about a Doctor Who marathon is getting to watch everything in chronological order and make the wibley-wobley-timey-wimey stuff a bit less confusing in the future.

We start off the season with a brand new Doctor and a brand new companion, quite a bit in one shot but done well and helps create a unique relationship with him and Amy. We also meet Rory, Amy's future husband and the Doctors companion. Oh, and not to mention the two mysteries that will span all the way up to the end of season seven! I really enjoy the Weeping Angels episodes, mostly because it has River in it but also I really enjoy the Angels, plus, one of my favourite quotes of the series - "Octavian: [about The Doctor] You trust this man? River Song: I absolutely trust him. Octavian: He's not some kind of madman, then? River Song: [pause] I absolutely trust him."

Along with a dream maker, some Daleks, a giant space whale, vampires and Vincent Van Gogh there's a great number of foes for the Doctor. The writing is well done with a great two parter to round off the series taking a bit of inspiration from Pandora's Box and bringing several of his greatest foes into one area. I really enjoyed the season, it did have a little bit of star struck Amy but I'm glad that they brought Rory into the picture and it opens it up for a lot more in the future.

"There is a fifth dimension, beyond that which is known to man. It is a dimension as vast as space and as timeless as infinity. It is the middle ground between light and shadow, between science and superstition, and it lies between the pit of man's fears and the summit of his knowledge. This is the dimension of imagination. It is an area which we call The Twilight Zone."

Settle in for 36 episodes where nothing is as it seems, the strange is normal and where anything can happen.