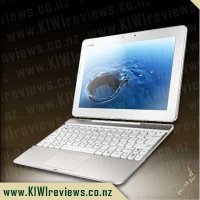 Disclosure StatementFULL DISCLOSURE: A number of units of this product have, at some time, been supplied to KIWIreviews by ASUS or their agents for the purposes of unbiased, independent reviews. No fee was accepted by KIWIreviews or the reviewers themselves - these are genuine, unpaid consumer reviews.
Available:
August 2014

The new ASUS Transformer Pad TF103 features a new mobile keyboard dock with a hidden hinge design, and is powered by the latest 64-bit Intel Atom Z3745 quad-core processor (up to 1.86GHz). The tablet measures just 257.4 x 178.4 x 9.9mm, and is slightly thicker at 19.8mm when docked. The new keyboard dock has ergonomic chiclet keys with 1.9mm of key travel, and includes intuitive one-touch function keys for common tasks like delete or screen grab.

The Transformer Pad TF103C has an HD 1280 x 800 display with IPS technology for 170-degree wide viewing angles. This improves on colour accuracy for more vibrant hues, with minimal colour shift even when viewed from extreme angles.

Comparing the TF103c against it's peers, this holds it own. While not the most spacious - with only 16gb onboard - it does still give you two expansion options: microUSB-B and MicroSD. Plus of course, when docked to it's keyboard, you pick up another expansion port - a standard USB 2.0 socket. Not too shabby for $499 when you factor in the high-midrange CPU, and the support of one of the largest App storehouses around. Packed with all the usual Google Stalwarts, such a Google+, Chrome, Maps, GMail, Google Drive, Newsstand, YouTube, Voice Search and Zinio, and on top of the default run of Android OS 4.42 (KitKat) it also comes with a few Asus-specifics that are mostly tucked away in the Settings tab and GUI profiles, but are worth exploring if you really want to squeeze the best performance out of the hardware.

One of the biggest things to note is power usage. This baby is frugal with her electrons, making the very best of them. Powered by a compact 3.9v LiIon battery pack, it takes between 50-90 minutes to fully charge up, and can still hold out for 105 minutes on full-power GPS, one of the most power-hungry features of any portable device. You can play games for anywhere between 2-3.5 hours on a full charge, use it as an eReader for up to 12 hours between charges, and even use it as an emergy flashlight for a full 3 hours before the spark dies. That is a very impressive range of features that put this unit solidly in the running as "a damned good investment" and way past "geek toy" status. This is significantly enabled by the addition of some ASUS custom power profiles you can select that are added on top of the OS's own defaults.

Branching away from it's traditional brushed aluminium finish, the Transformer line now sports a sleek, easy-grip plastic case with aluminium trim, while the keyboard retains a brushed-aluminium look in the plastic case. The trackpad is tidy, and no smaller than you would find on any netbook or small laptop, proportionally speaking. While it is responsive and easy to use, I am too used to mice, and snapped one into the USB port, foregoing extra storage. The keys themselves look a little old-school iMac with their basically-square format with only slightly-rounded corners and dark-grey print. With a full 3mm of travel, the keys are far from soft-touch, but it doesn't slow down typing much and with no appreciable -click- they are safe to use in libraries and other "quiet-only" spaces without sending the custodians into fits. Some of the little details are strange at first, but make a lot of sense if you consider low-light usage scenarios - the 1 and 6 keys, as well as the up and down cursor keys, are accented to give you clear positional reference markers in even the dimmest rooms, considering the light coming off the screen. The font-face is easy on the eye but clear and legible. There are no "function" keys per se, but there is a command bar up top that carries media player and quicklaunch keys, so you have the functionality... but beware the instinct to tap F1 for help - on this baby, that's the SLEEP key. Warning: Probability of Extreme Frustration: 80%

With Bluetooth 4.0 you have access to the full gamut of BT-enabled devices at a decent range. Also carrying GPS Radio and full 802.11a/b/g/n WiFi on 2.4GHz and 5GHz means you can maximise whatever WiFi options are available. The only band missing that would have topped the charts for me would be 802.11ac for that turbo-charged bandwidth I enjoy in my office. When it comes to being a media device the TF103c does a pretty good job for a portable device, even when streaming media from networked storage over WiFi. You can make it through an average movie easily, and possibly even a second one with time to spare before your battery runs dry, and while the speakers are a smidge weak in the bass, they are still very well balanced and give you a repectable sound, albeit nothing the neighbours would complain about volume-wise. Unless you live in a hostel of flat with paper-thin walls. (Is there any other kind?) Of course, with the lack of the usual "extra battery pack" that used to come standard in the older Transformer series units, this does mean that you won't get much extra boost when it's in "work" mode - slightly less in fact because of the need to power the keyboard from the tablet's power reserves.

One of the main uses of tablets these days, beyond playing some form of fruit abuse or pork abuse by upset avians, is that of "Digital Camera" and that is, I regret, the one area this unit should hide it's CPU in shame. With a rather underpowered 2MP camera on the outer face, and a stunningly old-school 0.3MP camera on the users' side, this can be used for grainy, jerky video chats in bright light... but under low-light conditions all you will get is coloured snow, and even in optimum conditions the colour is washy, the shadows grainy, and the white balance is so far out of whack it would have been easier to use a black-&-white camera and just saved the embarassment.

On a more up-beat note, apps open very quickly, faster than any device I have encountered to date. This makes up for the apparently drawn-out boot time this device suffers from. The only issue I found that I couldn't counter was after logging in to my Google account, and wanting to remove some apps from the "My Apps" tab - while this is a simple process on every other device I have, on this one it seemed reluctant to allow it, cancelling the operation and closing the confirmation dialogue before I could get my finger to the OK button. A tiny issue, to be sure, but I wonder what other quirks it may have that I didn't find in the time I had it on the testbench.

Overall, fine for the target middle-range market for sure. Anmyone under 25 who wants this as a recreational tool will find it very acceptable outsice of most social situations. It's no status symbol for sure, but it's hardly a toy either. This unit, fitted with 32gb of memory and a decent pair of cameras would be hardly more expensive, but far more practical and worthy of what is still a moderately high price tag. While I wouldn't buy it myself in it's current format, I would be happy to snap one up if I saw it on sale for around $350 and consider myself the lucky dog indeed.