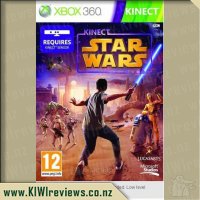 Kinect Star Wars brings the Star Wars Universe to life like never before. Harnessing the controller-free power of Kinect for Xbox 360, Kinect Star Wars allows fans to physically experience training as a Jedi, using the Force and battling with a lightsaber. Using full body motions, players can live out the ultimate Star Wars fantasy, no controller required.

We were very lucky to get to review this game recently. I am not personally a big fan of Star Wars and the Star Wars universe, but my husband is and as a result my eldest daughter loves it too. She has Star Wars books, Angry Birds and a few talking plushies of Chewy and co. For this reason, I knew this game would be a hit and it was.

We got into it on Saturday. As I put the game in the Xbox, she delighted in the intro with C3PO and R2D2. She immediately wanted to play as R2D2 but was not too disappointed when she saw she was going to be a Jedi in training instead. It took us a wee while to get the Kinect configured to pick us both up since I am a bit taller than her. But we got it sorted and got into training.

The training session was really good and useful. We were able to select a beginner level, which made things achievable for both of us. That makes it more enjoyable after all. With two player the screen splits and we took on drones and other trainees to learn the best way to swing our light sabers. Then we learnt how to move our characters through a range of obstacles. My daughter struggled a bit and the Kinect was constantly telling her to move back. Still eventually we got there.

Then we were under attack. This helped us easily move from tutorial mode into the action. The attack seemed relentless and we had to do all sorts of things, from chopping down robots, lizard men, cutting into pod racer type things and jumping up and down off things. We got to drive hovering bikes and delighted in each of us getting to be Yoda's transport. We had a lot of fun and a lot of giggles.

On a serious note, this game is tough! It is physically demanding, and I got a very good work out n the days I was playing. I handed over to my husband at one point on Sunday so I could make some lunch for the girls. He enjoyed playing too, but he definitely earnt his lunch! We both had sweat pouring off us. We also discovered that left or right handed players have no issues with this game. If you are left handed, you just step up for recognition by the Kinect and raise our sword hand. It will then calculate you as right or left handed with no controller required. That was pretty cool in our book.

This is the game of dark fun, where players who are dead right win! Many people die in utterly ridiculous ways, and Stupid Deaths challenges players to identify myth versus fact. In this hilarious party game, players work to beat the Grim Reaper before the Grim Reaper beats them.

Players start the game with a True and a False Voting Card as well as an Extra Life Token. All the players begin on the Green space, half way around the ... more...