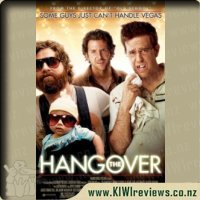 Phil, a married high school teacher, has the same maturity level as his students when he's with his pals. Stu, a dentist, is worried about everything, especially what his controlling girlfriend Melissa thinks. Because she disapproves of traditional male bonding rituals, Stu has to lie to her about the stag, he telling her that they are going on a wine tasting tour in the Napa Valley. Regardless, he intends on eventually marrying her, against the advice and wishes of his friends. And Alan seems to be unaware of what are considered the social graces of the western world.

The morning after their arrival in Las Vegas, they awaken in their hotel suite each with the worst hangover, no recollection of the night before and Doug is missing.

The Hangover is an aptly titled movie about a Vegas bachelor party gone horribly awry where the groom has vanished and his friends have no memory of the nights events.

The Hangover was a really fun movie with plenty of laughs, my husband and I went to see this when it came out and we almost didn't stop laughing for the entire movie. From waking up naked, discovering you are missing a tooth, there's a baby that isn't yours and a tiger in the bathroom... The simplest reason for The Hangover's success in being genuinely funny is the fact that it achieves a rare balance of character and vulgarity. You should definitely stick to the film ratings for this movie due to nudity, language and a few vulgar moments.

The acting is really well done, it's one of those movies though where you are amazed at times that anyone manages to keep a straight face, I don't think I possibly could have. I only recognized a couple of actors, and only one was from the main foursome, Bradley Cooper. The supporting cast is very diverse including Mike Tyson, playing himself, wanting his pet tiger back. I've watched this a few times and really like Mr Chow, favourite character by far, I can't really think of anything offhand that needs improving.

I really enjoyed The Hangover and it was one of the few movies that I was looking forward to a sequel.