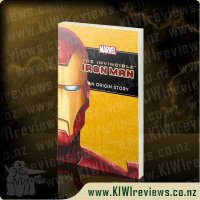 Well, I think that this book is better than the larger version, it has more text and was much more fun to read. The pictures were awesome, they had been made to look like paintings, and were extremely detailed. Even though the book is more suited for a younger audience, I found it quite alright, and I'm almost 13!! The story sounded mostly like the movie (which was very cool, by the way), and the text was also very descriptive, I almost didn't need the pictures to get a mental image of the story.

I loved the cover, the face of Iron Man on the cover and the face of Tony Stark on the back expressed the whole "one person, two identities" factor, and there was also a cool-looking circuit board pattern on both the front and back covers that is revealed when the light hits it right. I have no issues with the story itself, and apart from the fact that it's a childrens book, it was pretty good.

The price is perfect, it feels like it fits the value quite well, and the book has a good amount of content. I don't know if I'll read it again, I've already read it through about 3 times, so I think that aspect deserves a solid 6/10. Overall, this thing was good. Have fun reading!