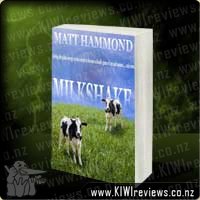 On the day David Turner is supposed to emigrate to New Zealand, he witnesses a savage murder and becomes caught up in ruthless global conspiracy.

A thirty year-old technological discovery threatens his own future and jeopardises the lives of millions of others as David discovers that starting a new life is about to become a deadly game of cat and mouse... and, somewhat surprisingly, cows.

Modifying milk so that ethanol can be processed from it could be the solution to an impending global oil crisis, but drinking it will kill you.

Can the truth be uncovered before an entire country is sacrificed to satisfy the world's demand for bio-fuel?

An interesting tale of conspiracy set in the very contemporary political climate between the USA and New Zealand, Milkshake was a fast-paced and fairly easy read. I enjoyed the premise - that New Zealand had been chosen by the US as an off-shore bio-fuel production plant and all that was left was to take it over subtly (using such techniques as buying the ground from under us and influencing immigration and emigration). Given that I had no knowledge of the science behind their plans, I accepted all of that with the same suspension of disbelief I grant fantasy and science fiction.

The characters (almost entirely male) were fairly good, though could have done with a little more depth. My favourite by far was the handsome and brilliant Maori SIS dude who unfortunately only turned up in the final quarter of the novel. By the end of the book, I felt most of my questions had been answered and the conclusion was certainly satisfactory.

Being a self-published author myself, I know how hard it can be to eliminate all those pesky grammatical errors, and I was impressed for the most part by the smooth, readability of Matt's writing. He kept me interested right up to the last page (though I skimmed a few parts which were essentially 're-telling' the situation just in case you had forgotten what was going on).

I do recommend giving this one a go, especially if you are interested to read a story where you get to see New Zealand through the eyes of someone who has never been here before. I think that was actually my favourite thing about this book in the end - just the wonderful descriptions and insights of someone seeing the place I have always taken for granted with new eyes.

An unexpected saviour helps Sam continue his search for the last 13. His next terrifying nightmare leads him to Paris and the Council of Dreamers.

With Solaris shadowing his every move, Sam must fight to stay alive. Treasure beyond belief beckons, while tragedy strikes at the very heart of the Academy. Will Sam and his friends survive and stay in the race, or is the world doomed?

He must find the last 13. Our fate is in their hands.