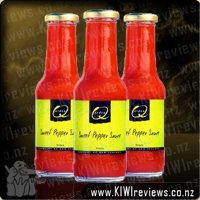 Disclosure StatementFULL DISCLOSURE: A number of units of this product have, at some time, been supplied to KIWIreviews by Q Gardens or their agents for the purposes of unbiased, independent reviews. No fee was accepted by KIWIreviews or the reviewers themselves - these are genuine, unpaid consumer reviews.
Available:
at selected quality retailers

A multitude of uses where full flavour is needed to complement a dish.

What can I say about this sauce that hasn't already been said by anyone else? It is a rich, delicious sauce that can be used with just about any food as an accompanyment to liven up any dish.

My daughter, for some reason was not too taken with this sauce, but that was fine because it left a lot more for me, and I used it on just about everything - unfortunately I ran out a bit too quick!

Would I buy again? Yes, definitely. I do think it could have benefited from the addition of a little bit of chilli. Not so much to burn your mouth, just a little to give a subtle kick.

The flavour of this sauce surprised me - rich in that distinctive sweet pepper (capsicum) flavour, almost reminiscent of the roast peppers that I enjoy so much and found this to be a perfect accompaniment to almost every meal - especially frittata.

One thing that would have made this sauce much better (and a higher score from me) was more body, which could easily be achieved with judicious use of some gums (Guar, Xanthan, Acacia) which would have given the sauce a little more mouth-feel, increased viscosity and help coat the the food you are serving without detracting from the flavours.
I guess the use of additives may be against the scope of what Q-gardens may be trying to achieve with their range, and I applaude them for it.

I really enjoy this sauce, I love the flavour and with some increased viscosity it would tempt me to buy this often.

Getting a solid 9 all the way through, this was a sauce I really enjoyed. Spicy and full of flavour, but with only a tiny 'heat' to it, this was a really pleasant alternative to tomato sauce on my BBQ'd sausages and hamburger. Though this wasn't as appealing for me as the Yaya's Tomato Sauce it certainly held more than enough flavour. Mixing this into a stir-fry sauce proved to be inspiring - the delicate sweetness of the capsicum flesh was offset wonderfully by the tartness of the rest of the sauce, making for a really special flavour.

I did find the consistency of the sauce to be a little too 'wet' for best results... tipping direct from the bottle resulted in WAY too much coming out the first time I tried it, especially since I was expecting a thick, slower pour from my experiences with the other sauces in the range. However, if one is wise to this ahead of time (and you are now

) then you can avoid the mistake and take greater care.

This was really nice when mixed with some sour cream to make a nice dip, but again the wetness doesn't give ideal results... so... instead I added it to a regular "reduced cream & onion soup" dip, using a little less of the reduced cream than normal. This gave some amazing results as far as I was concerned, though not everyone who tried it agreed. I guess it's one of those 'acquired taste' type foods.

Using this in some savoury mince, to be served over rice, proved to be the ideal all-rounder here. It gave a really nice extra 'lift' to the meal without adding anything 'too much' for the other diners. I would have to say though that used during the cooking phase on chargrilled meats is where this one really shined.

Overall, pretty darned good, but maybe not to everyone's tastes. If you like spice-fire, this is not the sauce you are looking for... move along now.

Last night for dinner I cooked up some chicken nuggets, fries and vegetables. Usually we have sweet chilli sauce with our chicken nuggets, but since my Q Garden review supplies arrived I suggested we try some different sauces.

The first one I cracked open was the Sweet Pepper Sauce. The sauce seemed quite watery so I tried to give it a really good shake before pouring it. Unfortunately, the shake didn't seem to help much and the sauce was still fairly sloppy as it came out.

I had a quick taste of this sauce straight, and my taste buds definitely got a surprise. I knew it wasn't going to be hot, but the sweet taste, with subtle vinegar tang and the beautiful taste of fresh peppers was so good.

I asked my daughter if she wanted to try some and she was a bit hesitate at first, but once she tried some, she wanted it poured all over her dinner. She ate almost everything on her plate and that is high praise. She eats like a sparrow usually.

The only negative was how wet the sauce was. Though the taste more than makes up for it, I suspect we would go through this bottle really quickly, more so because each serve would be unintentionally heavy-handed.

I'm looking forward to trying this poured over cream cheese with crackers too. Yum.