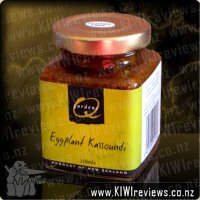 Eggplant Kassoundi is a heady combination of spices that is not overpowered by the heat from the chillies.

Serve with cheese or cold meats and enjoy the layers of taste. It is also great with meat curries, and a forkful whisked through steamed rice is delicious.

It gives a spicy lift to cold chicken, and it's a great great additive in pumpkin soup.

I had only two problems with this product: How the heck do I pronounce Kassoundi and what do I do with a Kassoundi?

The first part I gave up - as my good chum Will Shakepeare once said, "What's in a name? That which we call a kassoundi, By any other name would taste as sweet." or something like that....

The second part was easy - try it.

Aubergine (I can never get to grips calling it egg-plant) is one of my favourite vegetables and I am always happy to try anything with aubergine, and the aubergine kassoundi was no exception.

On opening the jar a rich, delicious smell surrounded my senses (a surprise from such a small jar) - rich, fruity, a hint of earthy spice (I suspect there is some cumin in there) with no herb or spice overpowering another. The taste confirms what the nose tells me. The fruitiness of the raisins complements the aubergine and all the other spice - garlic, ginger, chilli and so on were balanced to perfection.

This one needs some serious experimentation on my part. I tried it on toast to get a handle on the flavours involved - using something bland helps me to assess what I am working with and how it would work with other foods. I had a look at the Q Gardens website and rather conveniently they have some recipes and suggestions for their products.

I really enjoyed this product and can recommend it highly - and can't really understand why one or two other reviewers rated so poorly. It does deserve far more credit and praise.

I really liked this one, the combination of spices is really pleasant and not at all overpowering. I had this served on toast triangles with a curried soup and it made a really nice accompaniment. I also had it on sandwiches, it turned boring ham and cheese into something quite exciting, a nice chutney type feeling to it.

If you like things with what I would call an Indian type flavouring to them I think you'll enjoy this. I also think it will go great in either stir-frys or adding some to a slow cooker casserole, it would just give it a nice lift. I would serve it to spread on pita crisps. Yum!

This is one I would get again.

When i open the jar, i struggle to get past the almost burnt raisin smell. It looks alright but is a spoon type serving product, rather than a knife and spread one.

This has a sweet curry and pickling spice taste with a strong flavour. It goes great with cheese. With the number of uses you are limited only by your imagination although they give you a few ideas on the side. I'm not a huge eggplant fan so was reluctant to try it but was glad i did. Personally for me, its not a favourite and would probably sit in the fridge doing nothing unless i was making a stir fry type meal.

Q Gardens have attractively packaged this in a gorgeous 110ml jar with an eye catching green and black label and gold lid. I really liked that the product is gluten free with so many people now fitting into that category.

When I first cracked open the jar, my confusion level went through the roof... the smell carried with it hints of a rich, zingy tomato chutney, but also the fruity sweetness of my favourite 'curried sausages' recipe that had a generous helping of raisins and sultanas in it... how could it be both?!

Once I had my first taste though, that's when I because utterly lost... because I can't STAND eggplant normally, but this... this I could eat all day, on every dish, somehow. Wanting to get a handle on how many ways I could use this in a dish... I began to experiment...

The list was impressive, and too long to fully detail here... but I will include some of the more successful and surprising ones:
•  Mixed through mashed potato, to go on the side of a dish with plain steamed veges and a moderately-flavoured cut of meat, such as roast chicken.
•  Stirred generously through a casserole done in the slow-cooker.
•  Used as part of a stir-fry sauce along with a dash of soy sauce, some mild English mustard and a dash of the Red Pepper Relish..
•  On salada crackers, topped with a slice of colby cheddar cheese, a slice of tomato and a grind of fresh black pepper.
•  Mixed with the yolk of hard-boiled eggs and some plain mayo, blended well, and piped back into the halved whites - a new form of Devilled Eggs.

Overall, there were many other experiments tried, some moderately successful, some far from it. In the end though it came down to simply one question: "Do I want to get more of this, if I had to pay for it?" Answer: a resounding "Yes!" - so it looks like I will need to brush the cobwebs off the credit-card and see what can be arranged.

Makers of authentic, hand-made pizzas and pastas in the traditional Italian style. Food with character.

Located on the main road opposite the new Information Centre, just before the turn-off up to Mount Ruapehu. Do drop in and see us for lunch or dinner. Dine in or take-away.