ProdID: 3199 - The Story of Bo and the Circus that Wasn't
Author: Kyle Mewburn 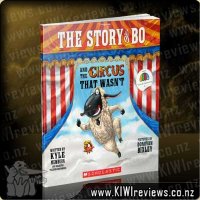 The Story of Bo and the Circus that Wasn't product reviews

To begin - i won a copy of this book from Kyle Mewburns Facebook page - it came complete with a personal message to both my boys ... 10/10 for that!! Awesome work!

I was SO excited about receiving this, as my sons grandmother is Bo ... and his aunties all call her BoBo the clown - so this book was really fitting! The art work inside is amazing! Fantastic to see that is a homegrown (New Zealand) masterpeice! The storyline was good, but it hasn't captivated Mr 3 .... We have read it a few times, but im always prompting him about reading it, if its a favourite, its the other way around. Perhaps he is too young for it. I also found the sentence structure hard to read with a great imaginative voice - it didn't flow or rhyme as much as other books we read. I really like how the words were placed on the page and the pictures around them.

This book was created from a great cause and its fantastic to see locals getting in and helping out!

The Story of Bo and the circus that wasn't is a New Zealand book written as a collaborative effort between Telecom customers, author Kyle Newburn, illustrator Donovan Bixley and Scholastic. As a parent, knowing that royalties from the sale go to the Telecom Foundation immediately puts it on a winning streak.

Aside from that I had a pretty good inkling that this book with be a hit with both of my kids and I was not at mistaken. The pictures are colourful and interesting and the story is just perfect to appeal to kids. Miss 5 loved the story and loved looking at the pictures, pointing out everything she could see (she loved the funny signs held by the audience!). Mstr 22months loved looking at the pictures, when I pulled out this book to review just now he came running over demanding it!

As a parent I also loved the message of the book, without ruining the story for anyone, it's a great and encouraging message for our kids about how to live thier lives.

All in all a great book and a great big hit in this house!

This arrived in our letterbox today. I ripped it open and promised the daughter it would be our bedtime story later on. Once bedtime rolled around, she excitedly got ready in her PJs and we sat down to find out who Bo is.

First impression - the cover to this book is beautiful and bright. Bo is a very animated sheep on the front. He looks like he is going to be funny and friendly. He is accompanied by a creature wearing a woolen hat. I spent a great deal of time trying to figure out what it was, but failed. Her identity is revealed late in the story and once it was, I felt a little silly for not seeing it earlier.

Inside the book was not a disappointment either. Although Bo lives in a grey world, he is so full of fun and colour and it shows through on each page. Each page has so many wonderful characters, hidden in the background of the story. The story itself was uplifting, about friendships and challenges.

I liked the language in the book, lots of quite long words used, but it flowed really well and I dont think a wordy book is a bad thing. It was still a quick read, compared to some of my daughter's books. Quick but satisfying enough that she didnt ask for a second story. Always good at bedtime when she has usually dragged her feet to get another 5 - 10 minutes out of me.

I did trip up on one word in the book, but eventually got my brain and tongue around it. It's a made up word, used several times. I could blame baby brain though.

Lastly, really cool that Kyle Mewburn wrote this with contribution of several other people (Telecom customers) and all funds go to the Telecom Foundation which is a Telecom umbrella charity, with a main focus on kiwi kids

Score: 9.9
Product reviews for listing 6346: Mummy, You're Special To Me -  Author: Laine Mitchell

My mummy tucks me in. She tells stories just right. We make secret wishes. She kisses me goodnight. Mummy, you're special to me. Follow Little Giraffe's journey in this beautiful story to share with your special mummy.