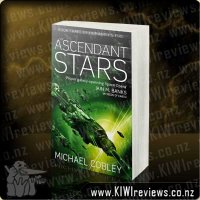 unknown to both sides, events are being manipulated by malignant AI minds, who have their own agenda. And they are near to unleashing their cohorts - a cyborg army of twisted machine intelligences imprisoned beneath Darien in the deepest layers of hyperspace.

Darien is the front line in a clash between destruction, oppression and liberty, with machines and sentients on both sides. But will the outcome be freedom, or the subversion of all life itself?

The much-anticipated, much-lauded conclusion to the Humanity's Fire trilogy, this was one roller-coaster of a wrap-up. I found it had ALMOST as many twisted plot elements as the previous two books combined. The revelations in this title though... well, there were fewer surprises than I expected. A lot of the "big twists" turned out to be less shocking and more "Oh, right so that's why..." instead.

I wasn't put off by that - I actually found it quite refreshing and relief-giving... too much tension and twist can make a good read into a hard slog all too quickly otherwise. So very predictable bits - in all three books, if I am to be quite fair - but nothing that really spoiled the plot.

I was intrigued by some of the amazing characters that popped up here and there, and in particular why the Roug played such a minor role, considering the big revelation about them... but I almost get the feeling there might be more stories from this universe to come... I can't pinpoint anything in particular that shouts out "This is not the end!" but there's a feeling of... openness, I guess... about the ending that leaves room for more, without ever really promising such. Quite clever really... tidy, but with a few places new threads could be slotted in...

Overall, a lovely conclusion to the trilogy... plenty of action where appropriate, a bit of a delicate touch here and there with the whole 'love on the battlefront' motif, and a story that could just as easily lay down to rest, or creep forward again into new adventures... I admit to being cautiously curious to see if my hunch plays out at all, and Michael isn't quite finished with humanity's far-flung daughter-forests just yet.

Heidi invented him in an emergency, to keep up with her friends' sudden and all-consuming love lives. Everyone's fallen for it - and for him. They are all messaging him with their deepest secrets... Heidi's mad online life is about to collide with her real one in a laugh out-loud teen novel.