Phoebe and the Night Creatures review 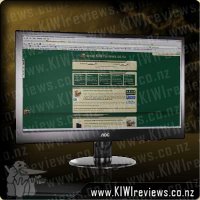 Disclosure StatementFULL DISCLOSURE: A number of units of this product have, at some time, been supplied to KIWIreviews by AOC or their agents for the purposes of unbiased, independent reviews. No fee was accepted by KIWIreviews or the reviewers themselves - these are genuine, unpaid consumer reviews.
Available:
at selected quality retailers

AOC brings 3D to your PC!

The e2352Phz features Flicker Free 3D technology: passive polarized glasses continuously show a different image pattern to each eye, without the on-off switching typical of many 3D displays, so you enjoy pleasant, vivid 3D images with a wide viewing angle.

The ultra-high dynamic contrast of 20,000,000:1 reveals more depth and detail in darker scenes and carries a built-in speaker for improved desktop sound.

The e2352Phz connects to any PC, and its HDMI 1.4a input is ready to play 3D video and sound from the latest consumer electronics devices, including 3D Blu-ray and game consoles.

The LED backlight panel saves the environment, containing no toxic mercury and using only half the power of traditional CCFL screens. To enhance your total viewing pleasure, the monitor design is slim and streamlined, with discreetly concealed control buttons.

When I first saw this monitor at the IngramMicro Showcase earlier this year, I honestly thought it was going to carry a price tag of $600+... after all, 23-inch widescreen, 3D-capable, able to accept 3 different inputs, and more than capable of displaying Blu-Ray or HD at it's very best? SO you can imagine how much I was drooling when I was told "Nope, $399 since we're aiming it as 'entry level' tech for the home."

So, what does this offer the user... probably the biggest thing is, of course, the 3D. Though there are 3D TVs that offer computer monitor capabilities - to a degree - a-plenty on the market, this is one of the first 3D monitors available that is both free-standing and uses the passive 'dual polarisation' system. No fancy battery-powered glasses that will almost certainly run out of juice midway through a movie sometime, and are frightfully expensive if you want more than a single set. This beastie uses the same "Real-D 3D" glasses you use at the cinemas, so if you need more - for friends or family viewing pleasure - just keep the set(s) you bought at the movies!

The built-in speakers are pretty good, though I would hardly say they compare to a dedicated viewer's external sound system... nothing beats surround with a sub under the desk. -oomph!- But they are at least functional for the basics, discrete and work well enough you won't NEED to clutter your desk with externals if you don't want to. Be aware though that you will still require a quality sound card to drive them. It's still "garbage in get garbage out."

So, what is WRONG with this beast? A couple of small, bit significant issues that got to me... Firstly, the stand. It's quite lean and slim, meaning it's not sturdy. On the plus side, being such a sleek and svelte monitor, it doesn't NEED a sturdy stem to hold it up, but this does make the monitor susceptible to sway at the slightest provocation. And this leads cleanly into the second 'gripe' for me - the controls. They are located on the underside of the monitor, on the right side. So pushing up on any of them makes the whole monitor lean to the left. Normally, this wouldn't be an issue, but when you combine light weight and flimsy stem, it makes for an unstable monitor... which could - if you aren't careful - lead to an expensive paperweight. Seriously, the controls would have been better if they were centralised, and on top IMHO. Or, you could just ditch the stem entirely, and look at an alternative mounting system like a sprung arm or wall-mount.

These two issue, though functionally frustrating, don't detract from the worth of this delightful screen. The ability to flip between 2D and 3D with a couple of button pushes is great. What I would LOVE to see is some form of USB connection and a driver API to allow smart-cookie developers to create an on-screen remote control though. That would make this into a market beater in my books. All I can hope is the next generation will come with something like that, and of course give us bigger screens, running at obscenely huge resolutions, at an affordable price-point. I've seen 40" screens being used as monitors running at the same res as this... and though they look so impressive from across the room, when you are perched in front of them you see every bloated pixel. Give me a 40" version that does, say, 2880 x 1620 and I'd need a bib...

Overall, amazing value as far as I can tell... considering I paid $420 for a 22" widescreen that has tinny speakers, no 3D, and will only take DVI input just over a year ago... how can this NOT be considered a great investment?! Installation was easy and required 10 minutes of time, a reboot, and NO DISCS OR DOWNLOADS! The on-screen menu was simple enough to work out without needing the manual, and the colour-calibration was simple using the nVidia Control Panel applet that came with my video card, though even the Windows default applet did a fairly good - if limited - job. 'Auto' settings work pretty well on the 'physical' parameters - sync rate, display size and position etc - but because I have tinted glasses I always find I need to do manual colour adjustment. Now, all I need is a second one to sit beside it so I can have both screens evenly colour-calibrated for best results.

The only thing you need to keep in mind is that for best viewing, you need to keep your eyes level. If you tilt your head, the 3D effect starts to warp and go wonky. Total headache-maker if you aren't careful. This isn't a fault with the monitor, more with the way the passive-polarised technology works.

Oh, and as a bit of fun... here's the footage of us destroying our old monitor out at Hinterland's skeet range - just because we just loved this one so much we wanted to keep it... Thanks AOC, you guys were great sports!

The DNS-327L is an easy-to-use solution for accessing, sharing, and backing up your important data by creating your own personal cloud. Keep all of your data safely stored and protected at home, and still have it at your fingertips with a sleek, award-winning NAS solution.