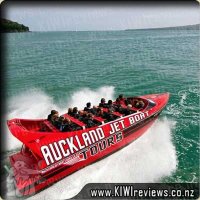 Disclosure StatementFULL DISCLOSURE: A number of units of this product have, at some time, been supplied to KIWIreviews by Auckland Jet Boat Tours or their agents for the purposes of unbiased, independent reviews. No fee was accepted by KIWIreviews or the reviewers themselves - these are genuine, unpaid consumer reviews.
Available:
See website

Auckland Jet Boat Tours is New Zealand's best adventure tour and a must, on your list of things to do in Auckland! Join us at the Viaduct Harbour in the heart of Downtown Auckland for a breathtaking, 35-minute jet boat tour of the stunning Auckland City Coastline, Waitemata Harbour and Hauraki Gulf.Tours depart on the hour, every hour, from 10:00am , 7 days a week. To avoid disappointment, we strongly recommend booking your jet boat adventure in advance, as availability can be limited.

Departing from the quayside of the Voyager New Zealand, Maritime Museum, in the Auckland Viaduct on a purpose-built, Twin 300HP, Jet Boat for 35 minutes of jet boating action. With plenty of breathtaking scenery mixed with a distinctly New Zealand-style, guided tour and commentary, you will be up close and personal to the Auckland City landscape and landmarks.

Free entry into the Voyager NZ Maritime Museum with every ticket sold.

The Auckland jet boat adventure combines high-speed thrills with jet boat manoeuvres that include 180 and 270 degree spins with sweeping turns, as you travel up to an exhilarating 85 kilometres per hour! With amazing views of the Auckland City Skyline, and plenty of photo opportunities to capture some lasting memories of Auckland's most famous and iconic landmarks.

Well, I have to say that this was one awesome experience, I was screaming for most of the tour! It went really fast, and when we turned I was almost soaked with water! The scenery was great; we even got to see a man bungy jumping from underneath the Auckland Harbour Bridge. Luckily there was only my Dad and I on the boat, so we could ask the driver questions instead of him just repeating the words he says every time he takes people for a tour.

When we went for spins, it was really freaky; it almost looked like we were going to dive headfirst into the water! The only downside to the speed of the boat was that the cold wind made my ears hurt, but I suppose that's just all part of the experience. By the time we had stopped, I was really wet and wanting more, it was so fun and freaky that I was nearly chewing my nails in anxiousness to get back on board and become all wet again!

Since it was good weather, the water and scenery looked at it's best, it would have been rather bad if the weather was rotten and it was pouring with rain, so this is the sort of thing you would want to do on a sunny day. I would recommend that people 8+ go on this, because the little kids might not be able to reach the safety rails and could end up falling in the water. [Admin note: Minimum height to ride is 1.2m - These folks are very strict on passenger safety and no exceptions are made.] The website looks awesome, It has a booking window, so you can fill in the form and have yourself a scheduled time and date for you to go on a tour, this is great for planning family outings.

The prices are reasonable, $65.00 for adults and only $45.00 for kids under 14 years of age. The theme of the website and the images are certain to make people want to try out the boat, and luckily the boat can hold up to 23 passengers! Do hope you enjoy these tours, believe me, you don't want to miss them.

I have always found speed to be scary... brown-undies-making scary... second only to falling from a great height... yet I have done that repeatedly, but not encountered speed in a watercraft for many, many more years than I care to name. So, when the opportunity arose, I was determined to make a go of it... there's nothing like a jetboat on open water to really put the willies up you...

From the start, the plan was to make this a little rough on the crew, to see how they coped with the negatives aspects of running a tourist attraction in the heart of Auckland's CBD waterfront district, especially with the Rugby World Cup madness starting to kick in and parking being harder to find than spare change in Scrooge's pants pocket. So, we decided to play the "lost and can't find parking" card and see how it panned out. Would they wait? Would the re-book us if we were late? Would they say "Sorry, tough luck, you missed the boat - literally"? As it would turn out... it wouldn't be as simple as that...

The crew rang us 15 minutes ahead of launch time to confirm we were arriving - at that time they were told, in cheerful tones, that we were driving right past them, seeking a nearby parking spot. Little did they know, we were a) headed in the opposite direction to the best parking, and b) that we weren't actually aware of that fact, and were seriously hopeful of parking nearby. 5 minutes later another phonecall - this time from us to them... "Erm, hey, we might not make it - can NOT find parking within a 10 minute walk of you... and we're now stuck heading south on Queen Street..." (At this point I was thinking if they cancelled the booking, at least we could aim for Giapo!)

To my utter surprise... despite there being a crowd of customers waiting to board the boat and thus needing their attention... the crew started to talk us through finding the best parking, less than 2 minutes from the jetty. However, by the time we looped around a few streets the wrong way and parked, had gotten changed into 'anonymous' clothes (nothing gives the game away like turning up in a KIWIreviews T-shirt!), paid for 90 minutes parking, and dashed off to find the jetty... we watched with mixed feelings as the boat gently plowed out into the harbour... Sorry guys, we actually WERE aiming to be just 2 minutes late, not 8 minutes!

Never mind, thought I... this will test matters just as well... so we trod merrily down the pier, through what appeared to be the outdoor dining area of a restaurant/cafe, through a wire gate and down the ramp to the dock and reception shack... face to 'embarrassed tourist visiting the big smoke' mode... and front up to the counter with apologies loaded and ready to spout... but they weren't needed, it seems. The chap behind the counter was friendly and somewhat philosophical about it, saying "no worries, it happens... we'll just stick you on the next one, if that's OK?" and politely asking if I wouldn't mind paying right away though, since this was a phone booking without a credit card.

We added some ice-cream for Mr3, to try and distract him from the fact he was too young and short to ride "...the big red boat , vroom vroom!" as he so cheerfully announced... tacked on another seat for Mr11, who had decided to brave his fear and join the ride... and then we simply chatted with the crew while we waited for "Ruby Red Lips" to reappear in half an hour or so. So friendly, no signs of niggles at the mess we caused them, and willing to gossip on a wide range of topics... it was almost like having a coffee with a couple of new mates. Stunningly good service.

The boat arrived, we two got dressed in our waterproof overclothes, were presented with a pair of sunglasses each and some lifejackets, and then asked to kindly head for the boat. Photos taken, safety talk done, a rough 'tour itinerary' given by the driver - who also explained the hand signals to watch for and the results to expect, then off we went... we started with a gentle two-full-turns about 200m from the dock, and got a brief lesson in Maori names of surrounding features, followed by a slow cruise out to the main shipping lane, and down went the hammer... we were blatting along at a juicy 80-85kph yet it felt as though we were doing 120, thanks to the headwind.

Under the harbour bridge and a quick 300 degree flat spin with a 30 degree bums-up as we rode up onto the shockwave, then it was time for a bit of a history lesson again... and a well-timed encounter with the bungy-jump station slung underneath the bridge... the chap leaping was brave, I'll give him that... but he wanted to stay dry... and upside down for as long as possible it seemed, because he didn't pull the release to let him sit upright as he was hauled skyward again. Then our driver informed us we were to "surf some wake..." which basically meant playing in, and jumping over, the waves caused by the passing ferry, or water taxi it looked more like.

More high speed runs up and down the harbour, more spins and stops for history lessons and sightseeing, then a long and full-on sprint back to base... soaking wet, freezing wind blasting in our faces... and HUGE grins all over our silly mugs. WINNA!

Docking was simple, quick and very efficient. We were off the boat, lifejackets and wetwear off and ready to depart in minutes. Presented with a couple of tickets to allow us to order photos online if we so desired, we were headed back for the car... because, of course, we had taken longer than planned thanks to missing the ride at 11am... meaning parking meter had run out 10 minutes ago and the penalty was stated at $65... thankfully, no ticket awaited us.

Overall, this has to be a MUST DO stop if you are in Auckland, down the waterfront, and have a wad of money to spare. $65 does seem like a bit of a hit to the wallet, until you consider that this is a ride that will have you screaming like a girl, whooping like a loonie... or probably both. It's a laugh, a trip, and an adventure all rolled into one very soggy, but ultimately memorable way to pass an hour of your day. There was only ONE thing that had me feeling let down... for safety reasons, it isn't possible to film the ride - BOTH hands MUST be firmly grasping the safety rail, or the driver runs the risk of losing someone overboard, or worse, faceplanting into the head of the chap in front of them, resulting in TWO casualties. And there are no cameras mounted to the boats at this stage... so all you can take away are memories, and photos taken before the ride. However, plans are afoot to remedy this, they tell me... Guess we'll have to see if we can talk them into a 'follow up review' after the cameras are fitted...