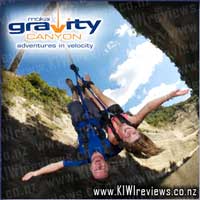 Disclosure StatementFULL DISCLOSURE: A number of units of this product have, at some time, been supplied to KIWIreviews by Gravity Canyon or their agents for the purposes of unbiased, independent reviews. No fee was accepted by KIWIreviews or the reviewers themselves - these are genuine, unpaid consumer reviews.
Available:
Normal hours.

80 metres high and no turning back!

Festival of the Lights
Rating: 10.0

It's been a week since I did the bungy and I'm still laughing and giggling when I think about it, I'm still taking deep breaths as if I was about to jump again when I'm watching myself do it on the dvd

The bungy for me would have to be one of the biggest achievements and best thrill I think I've had, certainly not something I will forget and definitely something I would do again.

On the way to do the flying fox, which was the first ride we did, we passed a woman on her way down, we had a few words with her and she mentioned she had done the bungy but wouldn't do it again. This didn't help my nerves at all, as I was already questioning myself whether I could do it. But looking back I would be kicking myself if I didn't do it.

I had just done the bridge swing and was still fizzing about it, thinking that it was basically a bungy jump, the only difference being I was sitting down, so a bungy should be easy - just gotta stand up and jump... I wasn't thinking about the fact that this time there won't be someone pushing the button for me, I'd have to throw myself off, something the brain has programmed in it right from the start as being a bad idea.

This is the one ride that nothing can settle your nerves for, and you are given a good amount of time to stew about it before the staff get you ready. It probably isn't that long but it certainly feels like it. By this stage the odd toilet stop was needed and after one I came out to see a staff member waiting with a harness.
"Oh crap, it must be that time already"
"It certainly is" I was told. Suddenly that feeling you got at school when you got caught doing something you shouldn't of been came over me again. They put the harness on me and I was walking down the narrow walkway over to two friendly staff members who were to attach the surprisingly heavy bungy chord to my ankles. I now had a good sweat going and a very dry mouth, fully thinking "I can't do it, I can't do it."
"just step out on the platform" I was asked, but as I walked out I was hit by a gust of wind and I froze, my legs were shaking like you wouldn't believe, my heart was beating enough for three people and I still had a few feet to go before I was on the edge. Finally with helpful verbal motivation from the staff I moved out and stood ready to go with arms outstretched, breathing like I had just run a marathon. They told me to look straight out in front of me and started counting me down
"3 - 2 - 1.....BUNGY!"..... Na, I couldn't move and couldn't stop looking down, I lifted my head back up
"3 - 2 - 1.....BUNGY!"..... Na, its not going to happen, I thought, DAMN! I'm this close and I cant do it, and started to get disappointed in myself but that must have been motivation for me because.....
"3 - 2 - 1.....BUNGY!" I jumped. Down I went, unbelievable speed, the wind was roaring in my ears, my organs were filling up my shoes and I was loving every second of it, then the bungy chord stopped my fall and slung me back up towards the bridge, now I was spinning around and then heading back down towards the river. I bounced around for little bit, each bounce they lowered me closer to the raft and waiting staff member, and our 10 year old reviewer, at the bottom. Once I was low enough they unhitched me from the cord and I flopped onto the soft landing pad like a bundle of washing.
"How was that?" she asked. I tried to answer but couldn't put any words together for quite some time.

Once I was ready and able I got into the chairlift which was to take me and my young support buddy back up to the bridge. The only thing I can remember of the ride up was it was relaxing. At that stage I couldn't focus on anything, it was an explosion of thoughts - "I DID IT! WOOHOO! WAAHAA! YIPEE!!!!!!!!! Hahahaha!!"

We are proud to host New Zealand's only giant saltwater crocodiles - the world's apex predators. Scar and Goldie were imported into NZ in early 2009 along with our 5 baby alligators. Complementing these ... more...