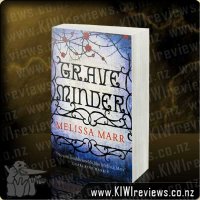 Disclosure StatementFULL DISCLOSURE: A number of units of this product have, at some time, been supplied to KIWIreviews by HarperCollins or their agents for the purposes of unbiased, independent reviews. No fee was accepted by KIWIreviews or the reviewers themselves - these are genuine, unpaid consumer reviews.
Available:
July 2011

When Rebekkah returns to her small-town home for her beloved Grandmother's funeral, little does she suspect that she is about to inherit a darkly dangerous family duty on behalf of Claysville's most demanding residents - the dead. Everyone in Claysville knows that the Barrows are no ordinary family, but no one can really explain why.

When respected matriarch Maylene Barrow dies suddenly her granddaughter Rebekkah returns to the small town she grew up in, where she must face the demons of her past -- the suicide of her half-sister Ella, the person she was closest to in the world, and the subsequent break-up of her parents' marriage. And she also re-encounters Byron, Ella's old boyfriend, someone to whom she has always felt a deep and mysterious connection. But the demons of the past are nothing compared with what the future has in store for Rebekkah.

Her grandmother has left her an inheritance both wonderful and terrible. An onerous responsibility now rests on her shoulders -- one for which she is ill-prepared to say the least. For behind Claysville's community-spirited, small-town facade lies a dark secret. One that ties Rebekkah and Byron together in an inextricable bond, and that will require them both to sacrifice everything to keep their friends and neighbours from harm.

I Love my Little Princess
Rating: 10.0

Rebekkah thought she was coming home to her adopted town for only a visit. Little did she know she was drawn back there by destiny and a centuries-old bargain. A responsibility to keep the town safe now is hers to shoulder, hers and the man she has spent years running away from. They are now bound together......forever.

I really enjoyed it. The main characters are easy to identify with. This would make a great movie and I could see JJ Abrams making it. I gave it a rating of 5 for realism because of the "dead" part of the story, I give it a 10 for the human relationship side.

Normally an author of books for young adults, this is a first adult novel for Melissa. I'm hoping this may turn into a series of books because I'm left wondering about Rebekkah and Byron. It felt like their adventures with the dead and each other has just started and we deserve to hear more

but in the mean time, while I eagerly await the next book, I will re read this one.

An uplifting, warmhearted early chapter book about a crow, who proves you can move mountains (or even dromedaries) and perform truly heroic deeds if you believe in yourself Zanzibar cooks a fine mushroom omelette,and he is a crow who wears his feathers well. At least he thought so, until a spectacled lizard knocks at his door, wanting to write an article about a remarkable person. Is Zanzibar remarkable? The lizard seems to doubt it. Zanzibar ... more...