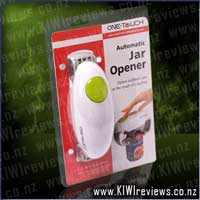 This automatic hands-free Jar opener is the design & quality leader in the market. The ergonomic handheld, compact design is shaped to fit the palm, is easy to store and is totally portable.

You simply place the battery-powered jar opener on top of the Jar and push the button. The device grips the side of the jar lid and rotates, opening all sizes of jars automatically. No more fumbling with stubborn tight jar lids.

The device stores easily in a kitchen drawer or cupboard, freeing up valuable counter space. This appliance is ideal for those with disabled hands (including arthritis etc).

•  Patented mechanical design, offers the most effortless way to open jars; hands free operation!
•  Opens most common domestic jars from 10mm to 100mm diameter cylindrical and is powered by two AA batteries (not included)
•  Easy step to operate - Place on top of the jar and a simple press of the start button will activate it.
•  Warranty - 12 months on manufacturing faults

While not as easy to use as the One Touch Can Opener in my opinion this is still a formidable device, and it is as easy as they say.

I hunted around for a suitable jar to test it on and after a while I found one, although I did wind the lid on a tad bit tighter to make sure it had a real test (yeah right!!!). Once this was done I put the jar down, placed the opener on top of the jar and pressed the button.

Now this is not a super speedy process by any means, but nor is it as slow as a snail, overall it takes about 30-40 seconds to do it's thing, and while that does seem a bit of time while you are waiting for it to do it's thing I can assure you most people will spend a lot longer struggling with a stubborn jar trying to open it.

I have to be brutally honest when I say I wasn't expecting much from this. It looked too weak and feeble to wrench the lid off anything, let alone anything that has been welded shut by someone with steel wrists or from a high torque factory lid machine.

How wrong I was. I don't mind admitting it.

This little beauty cracked the lids off anything put in its path. And yes, I really tried it out on anything and everything that had a lid - whether I wanted it open or not. Put it over the lid in question, press the button, hold until the arms take a firm grip, and stand back and let this gadget do it's job without further interference. (Or, you can slip it on when no-one is looking, and grunt impressively until such a time as the Jar Opener has done it's job, and then take the credit for being the jar hero!).

This is perfect for many people, and I would have to say, an essential in the home. Not only for weak chefs when the significant-other is out at work, but those with arthritis, the elderly, those with RSI - in fact, the list really is endless.

Think I am waxing lyrical with a little verbal overkill?

Even for a burly male, it can sometimes be embarrassingly difficult to open some jars. Whether the design doesn't allow for a decent grip, or maybe the lid has (apparently) been cold-welded onto the jar... it can be a Hurculean effort to crack the lid and get access to the goodies inside. There are the old tried-and-true methods of opening... the "Whacking it on the edge with the back of a knife" trick, designed to shock the lid loose and allow it to turn, or the "dip it under hot running water" in an effort to amplify the laws of thermal expansion of metal... pointless on a plastic lid for a start!

Save yourself the blushes, lame excuses, and screaming sore wrists... get yourself one of these! They don't look like much, but then this isn't a fashion parade... they are amazingly effective, even on jars of baby dessert with a lid diameter of only 50mm! As a test, I even left the plastic wrap seal on one jar, and this little egg-shaped beauty didn't skip a beat, wrenching the lid way smoothly.

Taking only 2 'AA' batteries, this is quite power-thrifty and won't see you running to the store every week for a fresh set... still, buying a multipack of batteries and keeping a spare set on hand may be a smart move... because Murphy's Law takes no holidaies and gives no mercy when you need a jar opened pronto.

Overall, I was highly impressed, and that is saying something because quite frankly I was expecting something far less capable than this proved itself to be. For those with RSI/OOS, or the elderly, this could be a real boon for you, and save you from many hours of pain!

Easily transport 24x Cupcakes or Muffins or use part and transport 12x cupcakes/muffins.