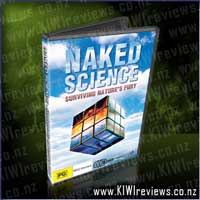 Disclosure StatementFULL DISCLOSURE: A number of units of this product have, at some time, been supplied to KIWIreviews by Roadshow (NZ) Ltd or their agents for the purposes of unbiased, independent reviews. No fee was accepted by KIWIreviews or the reviewers themselves - these are genuine, unpaid consumer reviews.
Available:
September 2009

I have always been a great advocate of educational television... call it moral pennance for too many years spent getting moontan from the thing as a child. So to find a 3-disc DVD set that contains a whopping *13* episodes, totalling over 10 hours of educational input... well, this was a bit of a 'holy grail' moment for me.

Most of the episodes are brilliant, full mof interesting and engaging content suitable for viewers ranging from the young to the much older... though I have to be honest and admit there are a couple that had me bored near to tears, despite having a lot of great information. The presentation was just so... repetitive in places. The 'Super Volcano' episode was a big case in point, as it repeated much the same information at least three times, slotting in a little new content between each loop. For this *one* episode, I would say skip it, and instead watch the mocumentary movie Supervolcano instead, as it give you far more information and in a much more interesting format.

However, to offset this one substandard episode, you will be treated to far many more that capture the attention and fill you with information and will pique your curiosity... case in point, the Bermuda Triangle episode... wherein they not only examine the myths and theories, but also venture into the 'hot zone' themselves with a camera crew in tow. Some really interesting stuff in this one that I didn't know about, despite having an interest in such things for many years. The episode on "Atlantis" is also quite fascinating, especially as I have just finished reading a novel about the lost city, which gave a fifth possible locaction for the Drowned Land.

Overall, this is most assuredly not only exzcellent value for money, but also a valuable resource for older kids. My 9 year old son was intrigued, but it failed to really grasp his attention due to the high rate of technical jargon... however he did ask me to keep it around so he could watch it after learning some of the words he heard... so that's a pretty good indication that though it may not grab them first time, it will at least sink a few hooks into them for later.

All episodes are newly re-mastered, utilising advances in technology and technique, and are supported by a fantastic collection of bonus features.
The Time Lords discover that the Master has stolen secret files revealing the location ... more...