The Sound of Music review 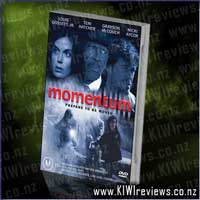 Zach Shefford has been living two lives since he was a child... the mild mannered teacher and the man with something to hide. He has a unique telekinetic ability, which he's hidden from those around him.

But Federal Agent Addison knows all about him and needs his help to stop a group of renegades who possess similar powers. If he refuses, he'll spend the rest of his life running from the Government.

Zach finds out that the leader of this group was once working for Agent Addison on an operation called Project: MOMENTUM. Their main focus was to find people with this unique ability and train them to work for the Government. But as they became too powerful Addison tried to have them killed.

It seems that fate has always pushed Zach in the direction of becoming a hero, it's time to find out.

The momentum never stops. Prepare to be moved!

This movie was definately out of the ordinary for me. I have heard of telekinesis before but have never seen it used in any way. This movie makes telekinesis look realistic, well as realistic as I can imagine it.

This is a story about how in the 1970's, the Government trained people who have the special gift of telekinesis, to use their gift as a weapon. Once the Government realised they had bitten off more than they could chew they started to kill off the people involved.

The Govt. tried sending Agents in to infiltrate the group, but every time they were detected and killed. This was, until Agent Addison found Zach Shefford. Since Zach also shares the gift, Agent Addison bribes him into infiltrating the group. As he is welcomed in to the group, this seals Addisons demise.
The group leader Adrian Geiger, kills Addison. Addison's partner kills Geiger. Geiger's final words to Zach are "Kill him, don't think you can do it, know you can do it". In which Zach follows Geiger's request.

I really enjoyed the movie. I thought it was a bit slow to begin with but then the momentum really got going and I found myself held in suspense a lot. Every so often i'd realise I was tense and have to relax myself.

There were a few bad attempts at making the movie funny but 15 mins into the film it stopped, so a big bonus!!

I was surprised to see Teri Hatcher in a serious role as I still see her as the ditzy desperate housewife.

The movie ended with a fairly open ending so I wouldn't be surprised if there was a sequel to come.

In the comedy Daddy Day Care, two fathers lose their jobs in product development at a large food company and are forced to take their sons out of the exclusive Chapman Academy and become stay-at-home fathers. With no job possibilities on the horizon, the two dads open their own day care facility, "Daddy Day Care", and employ some fairly unconventional and side splitting methods of caring for children. As "Daddy Day Care" starts to catch on, it launches them into a highly comedic rivalry with Chapman Academy's tough-as-nails director... who has driven all previous competitors out of business.