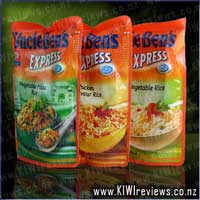 Disclosure StatementFULL DISCLOSURE: A number of units of this product have, at some time, been supplied to KIWIreviews by Mars (NZ) or their agents for the purposes of unbiased, independent reviews. No fee was accepted by KIWIreviews or the reviewers themselves - these are genuine, unpaid consumer reviews.
Available:
at supermarkets

Cooked chicken-flavoured long-grain rice with a selection of vegetables.

These rice packets are so easy even my husband can't get them wrong! They are quick, you can bung them in the microwave and not worry about them. They come in a variety of yummy flavours so can practically have a different one every day of the week and not get bored of the flavours.

The value for money is fantastic as you get rice and flavour all in one, as well as a serving bowl! They last ages in the cupboard so we stock up when they are on special at the supermarket, which is often the case anyway.

We mix it with a tin of tuna or chicken and makes a delicious and quick lunch, only takes 2 minutes so no worries wasting precious time on your lunch break preparing lunch and then having to wolf it all down. Or on their own, they make a great side to grilled chicken or BBQ steak for a healthy yet light dinner.

With Uncle Ben's Express Rice : Savoury Chicken Flavour already being flavoured it is quick, no fuss and gives the roast chicken an extra lovely taste when it comes out of the oven. I have never been able to make stuffing like my mum did while I was growing up but even my mum says that my Uncle Ben's Express Rice : Savoury Chicken Flavour stuffing is better than hers and I am not at all modest, so agree with her all the way!!

Even my friends are surprised when I tell them my stuffing is made from Uncle Ben's Express Rice : Savoury Chicken Flavour...my motto has always been working smarter not harder and using Uncle Ben's Express Rice : Savoury Chicken Flavour takes all the guess work out of making stuffing and always makes a great tasting stuffing that tastes great and stays moist and never dries out.

I don't need to add anything extra it is all good to use straight out of the pouch, it has the right amount of flavour...I can't fault it at all. If you want a no fuss and easy, great tasting stuffing for your chicken try using Uncle Ben's Express Rice : Savoury Chicken Flavour rice. You will be honestly surprised and you will fall in love with how simple and easy it is, and if there is any left (not usually in my house!!) it is again another instant meal to have with the chicken the next day for lunch.

I was a little unsure at buying the Uncle Bens Express Rice, I thought it would go hard and sticky in the microwave. But when I decided to buy some to try I was pleasantly surprised.
We don't usually have rice in my family as not all family members like it so I usually didn't bother with it. But Express Rice is so simple to cook. You just put it into the microwave for 2 minutes and it comes out beautifully cooked. It is important to loosen the rice in the packet first, as I didn't do this the first time I cooked it and it come out stuck together in lumps. The savoury chicken has a really nice flavour, and is perfect as a side dish to any meal.
I know make sure I always have a packet in my cupboard for those times I don't quite have enough for a meal as 2 of my children just love it. And there's no need to think ahead and prepare ahead of time. It's so simple to cook I can just grab it out of the cupboard when the rest of our meal is cooked and 2 minutes later, dish it up onto our plates.

After rummaging around in the pantry and freezer to see what I could find for a meal I found some skinless boneless chicken breast and this rice, so I thought what could be a better combination than that? So i defrosted the chicken, sliced it into bite size pieces, put the wok on with a tablespoon of oil, and then proceeded to stir fry the chicken pieces to a well cooked state, I then let that simmer while I nuked the chicken rice, once done I took the stir fried chicken breast and mixed it in with the rice, and it made a perfect meal for two.

This stuff is awesome! I wanted something with flavour and plenty of chunks of beef, so I dug around in the pantry and found a packet of Kaweka's Butter Chicken... now after trying their Meal-for-One version with it's Basmati Rice, I thought "Hmmm... chicken curry, chicken rice... could be interesting..." so slapped them both in the microwave and buzzed them for 3 minutes...

Out came the rice, which was promptly up-ended onto the plate... before I covered it with curry sauce, I snarfed a couple of forkfuls to taste-test... a really nice, but subtle flavour, and the veges were nice, though a little sparce... could have done with a few more. Then on with the curry and munching time...

These two flavours really complimented each other well, and though I think it is designed as more of a side-dish or as a base for something like a stir-fry, it actually worked really well as a bed for the curry. (Note: Mild-flavoured curries would be the best bet... too much spice or heat and you won't taste the rice at all.)

Overall, this is probably one I will keep 3 or 4 packets of in the pantry at all times... it's nice on it's own if you are in the mood for a relatively healthy snack, would be good as a side-dish to something like a roast chicken or vege bake, and works very well as a bed for stir-fries or curries. Honestly, I just can't see a food situation this flavour wouldn't work in... it's subtle enough you could probably do something fried-fish-related with it too.

As a flavoured rice, I thought this would be nice and easy to have for lunch at work.
I took this and some cold cooked chicken, threw it in the fridge and waited for lunch.
I followed the instructions on the package, tore up my chicken and popped both in a bowl... mixed them both together and there we had it - lunch!
It was quick, easy, and tasty

There was a definite chicken flavour to the rice, the seasoning was subtle and worked well together, there were visible pieces of veges that you could taste and it was just enough to fill me up and keep my tummy happy for a long afternoon.

I would definitely recommend this as a good lunch for those who need something fast and filling.