« Arthur and the Invisibles review

Pirates of the Caribbean : 3 : At World's End review 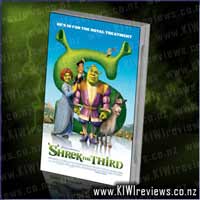 Princess Fiona, however, rallies a band of royal girlfriends to fend off a coup d'etat by the jilted Prince Charming.

I have loved all the movies in the Shrek series and this movie is no exception. I think this one is my favourite with the arrival of all the little babies! In this movie Shrek and Fiona return and this time Fiona is pregnant. The pair inherit the throne to the Kingdom of Far Far Away and Shrek does not feel he is fit to be king. Shrek and his side kick Donkey set out to find the only other air to the throne Artie.

Shrek must face his fears of fatherhood and convince Artie to come and be King. While he is away Prince Charming imprisons Fiona and the other female princesses and there are some very funny scenes that follow as they use their girl power to break free.

I think it ended nicely with the babies arriving and Shrek realising that everything was going to be all right and that he could be a Dad. All in all I really enjoyed this movie and think it is a good sequel to the first two, with even more new characters. I think the Shrek movies are a great alternative to the traditional fairy tales.

I watched Shrek the Third with my daughter just before the fourth movie came out. My daughter was new to the concept, having never seen the other Shrek movies. I was an avid follower of the Shrek movies. I don't know why, but even though you kinda know the movies will not be as awesome at the first of the series, you still feel drawn to continue to invest in the concept.

My daughter loved this movie. Shrek has a unique appeal to kids. Ogres are uncouth and rude, which always gets the biggest laughs from the littlies.

I enjoyed the film. It was a nice follow on from one and two, allowing the characters to grow and allowing the audience to see what they have been up to since we last saw them all. Its not a movie that will set the world on fire, but it's still a nice bit of escapism.

And the big green ogre's at it again!! Happily married to Fiona, Shrek is stuck in the kingdom of Far Far Away, desperately wanting to get back to his beloved swamp- but with the (Frog) King now sick, it is left to Shrek and Fiona to run the kingdom, which is a task Shrek quickly learns to really dislike. I don't blame him - the puffed up monkey suits he and Fiona are forced to wear are enough to put anyone off ruling a kingdom! When, on his death bed, the King announces Shrek as Heir to the throne, the poor Ogre freaks - until he learns there is one other who can take his place. So he's off, with sidekicks Donkey and Puss in tow, in search of the one who can save him from this unwanted life as King, and allow him to finally get back to his swamp- with Fiona's last words ringing in his ears. She's pregnant!! Hmmm, Shrek, a father?? I don't know which is scarier, him being King, or the thought of him being a Dad!
Shrek 3 is a mediocre number 3 in this trilogy (there is the worrying thought though that it won't stay just a trilogy! Why is it they always have to go and ruin a good movie by making sequels or turning them into trilogies? Why can't they just leave them as stand alone movies??), and although it has the usual laughs, it's not one that is a necessary addition to the collection, whether you have the first 2 or not. The kids will probably still enjoy it, but adults will most likely want to go find something more interesting to do while the kids are occupied in front of the screen.

Ever since college-bound Mike Wazowski was a little monster, he has dreamed of becoming a Scarer-and he knows better than anyone that the best Scarers come from Monsters University (MU). But during his first semester at MU, Mike's plans are derailed when he crosses paths with hotshot James P. Sullivan, "Sulley", a natural-born Scarer. The pair's out-of-c.ontrol competitive spirit gets them both kicked out of the University's elite ... more...