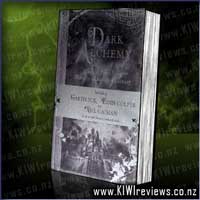 An outstanding adventure awaits in this collection of brand new works by some of the masters of modern fantasy.

For readers of all ages, these spellbinding stories will raise the pulse and quicken the heartbeat.

I adore anthologies... they give you a good 'sampler' of short stories to pick through whenever you get a chance. Because I don't get many long stretches of free time, I have to grab every chance I can find to do my reading in... be it a 10-minute stint between the end of lunch and the end of lunchbreak, or a half hour stuck in horrible traffic heading out of Wellington... so collections of short stories are great to keep on hand for those 'small gaps' I can fill with wonder and adventure, magic and mayhem...

I am especially finding myself drawn to collections edited by Gardner Dozois (How on earth do you pronounce his last name?!), because he just seems to be able to pull together the best assemblages... no story ever seems 'out of place' in his collections... the man has a real talent for bringing together a coherant selection of stories, even those that, at first glance, may not seem to fit... yet they do once you read them through.

Of these 18 stories, I would have to say my most favourite was "Stonefather" by Orson Scott Card... I have read some of his sci-fi titles, such as the "Homecoming" saga, and found them to be quite absorbing, but this was my first encounter with his fantasy works and I must admit to being highly impressed. The characters were quite solid and 'real', consistent amongst themselves and their world, and though magical by nature, the magic was a force within them, rather than a skill or ability to manipulate an external magical energy. In fact, their natural elemental magic reminded me in a way of the abilities described in the "Spirit Shinto" series by talented NZ author Dale Elvy.

Other notable tales in this collection were, for me, "Winter's Wife" by Elizabeth Hand, an intriguing tale told from the perspective of a young boy who meets a woman from the other side of the world who marries a local man, and turns out to be far more than she first appears... "The Magic Animal" by Gene Wolf, in which a young girl finds out she has a destiny far more surreal, and vital, than she could ever have imagined... and "Zinder" by Tanith Lee, which is a tale that proves the point, most eliquently, that you should never judge a person's worth by the way they look. You just might be under estimating them. (After all, to look at, the world's greatest living mind, Dr. Stephen Hawking would seem like a prime candidate for mercy-death, and yet without him, science as we know it, and cosmology in particular, would have been set back almost a century!)

Overall, this is another prime example of today's literary greats stretching their story muscles for our reading pleasure... and if you even think you might enjoy the fantasy genre, you would be well advised to try this sampler plate of stunning tales of the magical, the mysterious and the mighty.

But as Dan and Amy race around the world, they discover something horrifying. The Outcast's disasters ... more...