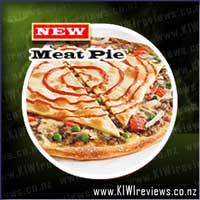 Domino's also got the 'hot mince on the lip burns like hell' effect spot on for the pizza too, but I have to say I prefer a pie as a pie and pizza as a pizza. The combination didn't really work for me, I found the pastry made it quite dry. It might be an idea to give it an extra swirl of wattie's tomato blood as well.

This time around I tried their new variant, the Mince and Bacon Pie Pizza... not too bad, but it suffered a dash of sequelitis... not as good as the original.

The bacon was a really nice addition, however I found the flavours started fighting for dominance and they both lost out. The saving grace was that we ordered it on the Cheese Burst crust, which added some extra -zing- for me.

Overall, still a pizza I would eat, but there are plenty of others in the Domino's menu that I would go for first.

Pizza and mince pie... together??? This struck me as both a rather weird, yet also enticing mixture of ingredients, and certainly NOT a combo I would have thought would have even a resemblance of the YUM factor!!! But I was very pleasantly mistaken. Here were two of my favourite food items mixed together, creating something I would say came pretty close to the ideal meal! Taking one look at the pizza as the box was opened, and I was instantly thinking of the large family pies you can get at the supermarket, with only a minor hint of pizza added to its look. The taste was not overpowering in one direction or the other, but a comfortable balance between the two... with me unable to actually say which one it resembled most.
Another definite plus was that I didn't find it greasy like a lot of other pizzas, so actually seemed to even be a reasonably healthy meal option. If there was to be anything I'd recommend changing with this pizza, it would simply be to have it as a PERMANENT part of the menu, instead of simply being a "for a limited time only" option!!!
If you like either pizza or mince pies, this is well worth giving a try!

I love many pizzas, but I am a bit of a mediocre fan of mince pies, so I was quite curious to see what sort of hybrid would result from this foodstuff-frankensteining...and I have to say I was quite impressed at how well they pulled it off.

Though this doesn't have that rich, beefy flavour I really love in a savoury mince dish (try adding some extra beef stock and some herbs folks!) I think this is by far one of the most interesting pizzas I have tried since some bright spark thought to try making dessert pizzas!

Quite yummy, very open to personal additions (eg. such as a dollop of tartare sauce for zing, or a fruit chutney), and quite easy to snarf down if you get it on the classic crust. This pizza is NOT available in Edge Crust or other speciality crusts such as the Puffection Crust... more's the pity, but you need a certain amount of base dough just to stop it from being a lap-burner!

Overall, a really nifty alternative, great for beer & poker nights with the lads, cold-winter-nights-by-the-fire nights with the kids (as proven by the fact my anti-pizza son loved his slice of this so much he was actually asking for more the next day!), and general social gatherings with friends who aren't afraid to look greedy shoving wedges of yumminess into their faces in a crowd.

Create Nachos with real zing. Made from a base of juicy tomatoes, onions, spicy jalapeño peppers, and infused with Mexican inspired herbs & spices. Just add to cooked mince and beans to create the perfect spicy Mexicali topping for crunchy nachos or tacos.