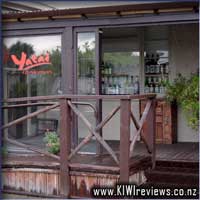 I am timid when it comes to trying new foods, but a group of 4 of us decided take the plunge and dine at this Japanese restaurant. Yatai is a place where the general idea is to order dishes as a group, and share each dish, eating together from the central communal plate. The dishes are small, and the menu is varied.

We weren't really sure what to expect. When we arrived, we were welcomed to our table. The décor was really something special. Chopsticks only are provided, no forks and knives! We had a few minutes to peruse the menu. Our very nice and helpful waitress took our order.

First was a 10pc chicken sushi platter, complete with wasabi, pickled ginger and soy. Now I don't like sushi, but after some pleading I tried it and have to say, my opinion hasn't changed! The others in the group ate sushi however and commented it was excellent, very fresh. After about five minutes came our next dish - 'Karrage' which is 5pc small boneless skinless chicken pieces, coated and deep fried. In the next five minutes, 'Ika Age' (squid rings) were next, 5pc breadcrumbed and deep fried with a delicious fruity sauce and a cabbage salad garnish. After about ten more minutes, our last ordered dish 'Okonomiyaki' which was a meat and vegetable fritter with your choice of meat or vegetarian. We chose chicken. The fritter came with mayonnaise drizzled on top. The fritter had what I believed to be dried fish flakes on top of it which, as you can imagine, smelled very strong. My friends and I struggled to eat our slice of fritter, due to the smell. A bit of a culture shock here! The fritter was cooked very well however, and apart from the flakes tasted very good.

Now, the Okonomiyaki was our last ordered dish, and we decided we were still feeling hungry so decided on a couple more dishes.

They were ordered, and we sat back and relaxed. The restaurant was almost full, and VERY loud. I don't think I would choose this place for a romantic dinner! A waitress attempted to shift a table across from us, asking two diners to stand from their table while they pulled the other table out from nearby. Luckily the diners were understanding, as this could have come across as quite intrusive and rude.

After about 10 minutes our next dish came out. 'Kushiyaki', which was skewered meats flame grilled - I chose pork. We ordered one skewer each. I was disappointed with the size here - there was only literally a mouthful of meat on this. They were piping hot though and delicious.

Next was 'Kushiage' which was skewered meats or mushrooms, breadcrumbed and deep fried. Again, we ordered one skewer each. Three of us ordered chicken, and one ordered mushroom. This order took about another ten minutes to come out, and unfortunately the waitress explained there were only three skewers - one chicken was still to come. This seemed quite strange, but we accepted it and ate on, disappointingly one person having to wait for their skewer to arrive. Again the portion was very small. The fourth skewer finally arrived after another ten minute wait. This was obviously an unfortunate mistake for Yatai which shouldn't have happened.

We decided to go for a dessert platter to share for afters, containing various delicious treats - creme caramel, tiramisu, chocolate mousse, panacotta and Kapiti ice cream. This was excellent, and just enough for four girls.

Our dining 'experience' took an hour and fourty minutes, which is considerably longer than most meals I eat out, of course due to the style of dining here. I wouldn't recommend if you had somewhere to be at a certain time after!

I was really impressed with value for money here. We split the bill four ways, and it came to $31.50 each including corkage charge. An absolute steal, I thought.

After my meal, I was not uncomfortably full, just happily content which was great. We had a chat to one of the owners who was just lovely and more than happy to chat to us even though she was run off her feet.

I would thoroughly recommend this restaurant to large groups for a great, fun night out.