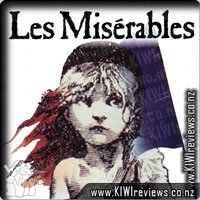 Disclosure StatementFULL DISCLOSURE: A number of units of this product have, at some time, been supplied to KIWIreviews by the company for the purposes of unbiased, independent reviews. No fee was accepted by KIWIreviews or the reviewers themselves - these are genuine, unpaid consumer reviews.
Available:
24th/25th March 2007

"Les Mis" tells the stories of escaped convict Jean Valjean and his attempts to start a new life and make the world a better place; the police inspector Javert, who becomes obsessed with finding Valjean; Fantine, the single mother of Cosette, who is forced to become a prostitute to support her daughter; Marius, a French student who falls in love with Valjean's adopted daughter Cosette; Eponine, the young daughter of the Thenardiers who falls in love with Marius; the Thenardiers, who own an Inn and exploit their customers; and Enjolras and the other students, who are working toward freeing the oppressed lower class of France.

I have never been known to be a great fan of musicals... the mere mention of "The Sound of Music" leaves my skin crawling, and the best you can usually get from me is sitting through a screening of "Mary Poppins" while reading a book, only because my son, strangely, loves it. So to find me driving hell-for-shoe-leather from Wellington to Palmerston North in 64 minutes to make a showing of Les Mis was a bit of a shock to some of my friends. But this is one stageshow I didn't want to miss, because it is the source of some of my favourite 'stirring tunes', such as "Do you hear the people sing" and "I dreamed a dream".

Barreling into the sumptuous Regent Theatre huffing like a steamtrain, and just squeeking into our seats as the curtain rose, my co-reviewer and I calmed our breathing and began to settle down for the show... and what a show it was!

A stirring performance by both Carry Green, as Eponine, and Dean O'Flaherty as, what became, my favourite character, Javert the jendarm. Carrie's strong voice and raw emotion carried off many a tune that could easily have failed due to technical glitches with the sound system that was brought in for the show, whereas Dean had to plow along even though a good quarter of his performance was nothing more than silent mouthing to the audience. However, his expressive body language told much of the story that would have otherwise been missed.

The love story between Marius, played well by Ryan Little, and Cosette, played by Delwyne Green, was inspirational, and Chris Green's rendition of Jean Valjean was superb. The standing ovation at the closing curtain was certainly well deserved by one and all.

Overall, though this is an international play, this was not an international production, and so the standards were a little lower... however, for a local production this was a stunning success, with some magic performed with minimal sets and discrete stage crew. Excellent examples of the Kiwi Attitude, the full set was not required, nor missed, and yet the whole story was told to a high degree of perfection. My only gripe... they ran out of programmes before I could get one, and thus I didn't have a chance to get it signed by the cast as they left the theatre later that night.

Hinterland provides premier Paintball and activity experiences right here in Hamilton. Stalk your opponents amongst ferns, a creek and a gully in the bush fields then it's survival of the quickest in the fast and furious world of the speedball field. Paintball Hamilton gives you the full adrenalin-pumping, heart racing experience in a safe and professional environment and only approx 15 minutes north of central Hamilton. ... more...