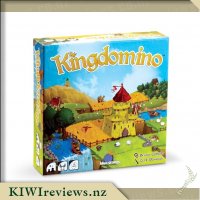 Kingdomino is a 2 to 4 player strategy game that plays like dominoes with a kingdom-building twist.

Each turn you will connect a new domino to your existing kingdom, making sure that at least one of its sides connects to a matching element already in play.

Make sure to include dominoes with crowns on them, because at the end of the game you will score points equal to the total number of matching elements multiplied by the number of crowns.

Kingdomios is one of those games that kept popping up as a suggestion in several boardgame groups that I'm in, whenever someone asked for recommendations, so one day when it was on special I picked up the family a copy and it has been played many times since. One aspect that I really like about this game is that game play order can change each turn. There are four tiles which get flipped over, player one places their meeple on the tile of their choice and the remaining players place theirs in order. But, now whoever has a meeple on the top tile goes first and gets to pick which tile they want first, a great was to add a bit more interest to the game and making you think if you want to be the first player in the next round or do you want to grab a tile that could really benefit you?

The domino twist to this is that each tile you place must match on one half, to the tile you are placing it next to (with the exception of your castle, which is wild on all sides) but that challenge comes with keeping your grid the correct size, in a two player game it can only be 7x7 and in a three or more game, 5x5. And whilst creating large areas of the same terrain is important, if you don't have any crowns on that terrain, you won't score any points for it at all. The scoring system, with the crowns, gives a good opportunity for the kids to do some multiplication, sneak in a little maths lesson. My three kids and I enjoy this game, though my youngest still struggles with the grid size, we've enjoyed it enough to buy the expansion.

LEGO Marvel Super Heroes features an original story crossing the entire Marvel Universe. Players take control of Iron Man, Spider-Man, the Hulk, Captain America, Wolverine and many more Marvel characters as they unite to stop Loki and a host of other Marvel villains from assembling a super-weapon capable of destroying the world. Players will chase ... more...