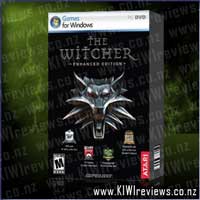 The Witcher: Enhanced Edition will be presented in a high-quality package, bound in a luxury embossed box set featuring a wealth of high-value extra content including additional adventures, music from and inspired by the game, re-mastered making of feature, a short story by the creator of The Witcher Andrej Sapkowski and much more. Numerous enhancements have been made to the widely acclaimed original game to deliver an experience second to none in the PC RPG genre.

• Multilanguage The Witcher: Enhanced Edition, a reworking of the best PC RPG game of 2007;
• DVD bonus disc including the D'jinni Adventure Editor and two brand new adventures created by CD Projekt Red:
• the D'jinni Adventure Editor: allows players to create or modify their own adventures in the world of The Witcher;
• "The Price of Neutrality": the adventure tells the story of Geralt coming back to Kaer Morhen and finding a mysterious camp near the stronghold (featuring 3 new quests);
•  "Side Effects": the first ever release of this new adventure which focuses on Geralt's close friend, Dandelion, and his troubles in Vizima City (featuring 5 new quests);
• Remastered "Making Of" documentary with never-before-seen bonus material;
• Soundtrack CD of original music written specifically for The Witcher;
• CD of original music inspired by The Witcher;
•  Instruction manual and game guide;
• Short story by Andrej Sapkowski featuring new art from the Monsterbook;
• A map for exploration throughout The Witcher 's world.

Fantastic 3rd person RPG, will keep you entertained for hours.

Pros:
- Nice easy-to-pick-up combat system using mouse clicks.
- Immersive environments that feel open and somewhat gritty.
- One of the few games with a bit more of a mature audience.
- Pretty graphics and a rewarding levelling/skills system.
- Long gameplay and great replayability.
- Great music and minigames for when you want to have a bit of a break from monster killing.

Cons:
- Combat would be nicer if you could set up some keyboard controls for it, mouse clicking all the time is fairly taxing, especially with the length of time youll end up playing (fortunately movement can be keyboard controlled).

Overall this is a brilliant game, I would probably say its the best rpg I've played to date with a great immersive storyline and lots of interesting characters along the way. Will undoubtedly keep you up till 6 in the morning without you realizing it and depending on the player, there's a good 40-60 hours of gameplay, especially with the side quests and tavern games.

Youll definitely be tempted to replay the game as there are three distinct paths to take with leveling, also there is the 'jack of all trades' approach and various alternate ways of completing quests.

Players take turns rolling the dice (featuring 6 unique symbols), spotting the tile with the matching pattern, then grabbing it before their opponents. The first player to snatch up 6 tiles wins the game and bestows great honor to the Grand Shidoshi, Master ... more...