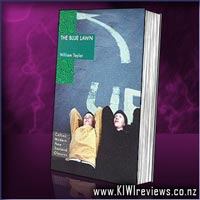 David is soon to turn 16. He is a talented rugby player, but rugby is losing its appeal and he decides to give it up, much to the disappointment of his Dad and coach. Theo is just slightly older and is new to town, staying with his grandmother while his mother is overseas. The boys become firm friends and it is not long before they realise there is more to their friendship.

First published in 1994, 'The Blue Lawn' is a compassionate novel about two young men as they deal with their emerging homosexuality. 'The Blue Lawn' won the 1995 AIM Children's Senior Fiction award and has just been reissued as a Collins Modern New Zealand Classic.

Had I been out to buy a book and read the back of the cover of this book I would have put it down straight away. Books about relationships are really not my area of interest, and certainly a book about a blossoming gay relationship would interest me even less.

As a personal choice for a book? Probably not. Would I reread it? Almost certainly. I think it will be the sort of book I would bring out to read to my daughter at a later date, because it is less about gay relationships, and more about relationships in general.

The author has written a clear story and has developed each character well. The personality of the characters in the book stand out and are believable as a commentary of small town New Zealand. The story jumps from the page and compels the reader to finish the book. Although it is something I would generally not have chosen to read, I did feel the need to finish the book. William Taylor truely has written a modern classic for New Zealand.