« The Book of New Zealand Records and Firsts review 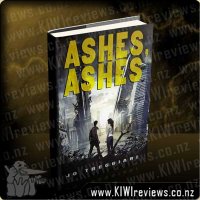 A thrilling tale of adventure, romance, and one girl's unyielding courage through the darkest of nightmares.

Epidemics, floods, droughts - for sixteen-year-old Lucy, the end of the world came and went, taking 99% of the population with it. As the weather continues to rage out of control, and Sweepers clean the streets of plague victims, Lucy survives alone in the wilds of Central Park. But when she's rescued from a pack of hunting dogs by a mysterious boy named Aidan, she reluctantly realizes she can't continue on her own. She joins his band of survivors, yet, a new danger awaits her: the Sweepers are looking for her.

There's something special about Lucy, and they will stop at nothing to have her.

Ashes, Ashes follows sixteen-year-old Lucy who is living in a post apocalyptic New York after a virus has killed off 99% of the world's population.

Lucy (when we meet her) is a survivor, living alone and barely keeping it together. Aidan is also surviving, living with a group of others. The world they once knew has been totally destroyed.

Their "worlds" are about to collide, and only together can they work out the big questions. Why/How the disease started? Why couldn't it be stopped? And why are people looking for Lucy?

You will find yourself unable to put this book down, wanting to find out these answers and being drawn into the relationship that is beginning to develop between Lucy and Aidan.

I don't know why post apocalyptic stories interest me so much; I think it's because of the "it-could-happen" aspect of them. It's scary and there's an element of possibility, which makes you want to read to the end of the book and then unsatisfied to read future sequels too.

I hope there's a sequel to this one!

The world has all but ended, most of the population wiped out, only a few survivors are left struggling to get along in a world that bears no resemblance to the one we know today. These sort of "end of the world" stories are always popular, you only have to look at the number of movies out along the same lines, it's a genre that I tend to enjoy. This book proved no exception.

The premise of the book was one that could very well happen so there is a definite sense of reality, of the possibility of global warming finally wrecking the havoc we're warned about and with it bringing back the old enemy of the plague. With all the discussion around looking after our planet, it was very easy to see that this could be a very real future. That there is this level of realism also gives us pause to stop and think about the very important message that is there.

I really liked the main character of Lucy, she was pretty easy to relate to, through her memories or flash backs, you could see she was a girl who could be any young girl, thrown into a situation totally foreign. As other characters joined the story, I also found the likeable and intriguing. The inevitable hints of romance didn't detract from the characters or take them over, it added a good extra dimension to the plot. No matter what situation we find ourselves in, some things will never change. I found it pretty easy to lose myself in this story, I was cheering on the band of survivors.

I would have liked there to be a little more about Lucy and why the Sweepers were looking for her, why she is so special. However given the target age group this book is for, it may not have worked as well as the book did. I'm hoping instead there may be room for a second book, I'd love to see what could happen and I think there is scope for a sequel.

I'd recommend this for anyone who enjoys some light but gripping adventure set in a time of disaster. I don't think you'll be disappointed.

Old Macdonald had a farm - e-i-e-i-o ..." Everyone knows the song. But now the farm and animals are in New Zealand and old Macdonald has a Swanndri and gumboots. Donovan Bixley's illustrations depict the beautiful New Zealand landscape - with farm animals! But what are those crazy animals up to?