ProdID: 8296 - Godzilla: King of the Monsters
Directed by Michael Dougherty 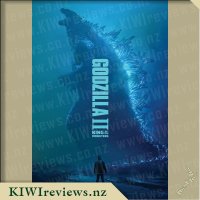 Disclosure StatementFULL DISCLOSURE: A number of units of this product have, at some time, been supplied to KIWIreviews by the company for the purposes of unbiased, independent reviews. No fee was accepted by KIWIreviews or the reviewers themselves - these are genuine, unpaid consumer reviews.
Available:
in cinemas 30th May 2019

Members of the crypto-zoological agency Monarch face off against a battery of god-sized monsters, including the mighty Godzilla, who collides with Mothra, Rodan, and his ultimate nemesis, the three-headed King Ghidorah. When these ancient super-species--thought to be mere myths--rise again, they all vie for supremacy, leaving humanity's very existence hanging in the balance.

For those that have read or watched reviews for the 2014 reboot, you may remember that there were some complaints that we didn't get to see enough of the titular character, Godzilla, and that the human storyline took up far too much of the focus. Well, I can safely say that the studios have remedied those comments in this latest film. There is plenty of Godzilla to be seen.

In fact, you get to see quite a lot of the big four; Godzilla, Mothra, Rodan, and Ghidorah. As far as character designs go, Mothra is exquisite and absolutely gorgeous. Godzilla just keeps getting better; still maintaining the same style as the 2014 film, the textures have improved quite significantly, and he really looks and moves like he is a huge lumbering monster god. Much like how Guillermo del Toro successfully gave the Jaegers heft and mass in Pacific Rim, Godzilla is a complete jock.

If you have come to the film to see Godzilla fight with some other giant beasts, you will not leave disappointed. Granted, some of the cinematography choices at the beginning can be annoying with a lot of close-ups and quick edits that make it difficult to fully appreciate what is going on, but as the film progresses, the scale continuously expands and wide shots are increasingly used, providing a great depth of field. What also helps with the identification of the monsters, is the colour scheme. Each one has its own colours and auras, which combined with some great lighting creates a very visually stimulating spectacle.

Of course, for a modern film, there does need to be a human element to direct the plot of the film. As I mentioned earlier, too much focus on the human side was previously considered a negative aspect of the 2014 film, and in Godzilla: King of the Monsters they have gone ahead and tried to reduce that emphasis. There is still a huge ensemble cast (Kyle Chandler, Vera Farmiga, Millie Bobby Brown, Bradley Whitford, Sally Hawkins, Charles Dance, Thomas Middleditch, Aisha Hinds, O'Shea Jackson Jr., David Strathairn, Ken Watanabe, and Zhang Ziyi) but each character has been stripped to the bare bones, which weakens the plot considerably (but we aren't here for that!).

The human element of the story is both convoluted and yet incredibly basic, with each characters single personality trait defining all of their actions, making the plot and dialogue very predictable. Apart from the constant reminder that the plot device/MacGuffin exists, the humans' function is to provide exposition and delve deeper into the lore of the MonsterVerse. And to that end, they work really well to expand on the universe and explain away some of the questions that we have about Godzilla and Monarch.

The editing of the film is a little bit hit-and-miss, there are some great moments that have tension coming out of the wazoo, but then there are others that feel like they are desperately cobbled together from mismatched pieces, and cause a bit of confusion visually, as well as with the tone of the film. Tension is well balanced, allowing it to build organically, and allowing several moments for that release to occur before getting back into it, and the score really hits that point home.

From a film critique standpoint, Godzilla: King of the Monsters is full of plot convenience, invulnerable characters, miraculously fast (and always fully fuelled) transport options, and a plethora of unnecessary human elements and characters that nobody really cares about.

But you don't watch Godzilla for the brilliant plot. You watch it for exciting fights and a large amount of environmental destruction. Godzilla: King of the Monsters gives you both in spades, and is an enthralling watch when the action really starts to heat up. So switch off the brain, feel a sense of awe as you take in the details of each creature, and get ready to be on the edge of your seat when the fight for supremacy breaks out.