Can You Ever Forgive Me? review 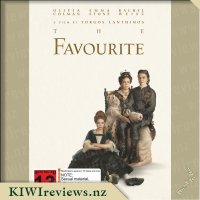 In early 18th century England, a frail Queen Anne (Olivia Colman) occupies the throne, and her close friend, Lady Sarah (Rachel Weisz), governs the country in her stead. When a new servant, Abigail (Emma Stone), arrives, there begins an outrageous rivalry to become the Queen's favourite.

Movie awards included one Oscar, one Golden Globes award, seven BAFTA awards, and numerous other major awards together with many further nominations.

The DVD edition includes the special feature, "Unstitching the Costume Drama", and a selection of deleted scenes.

It is seldom that I watch a movie three times before reviewing it, but this one intrigued me to the point that I needed to re-watch just to pick up all the nuances. Certainly I noticed new things on each revisit, and no doubt I will watch it through yet again because it is quite simply one of the funniest films I have ever seen. And yet it is not just a black comedy - that is only one of the labels I could attach to it, and support with plenty of evidence. It is also at times a drama, a satire, a farce, and a historical film. The movie is loosely based on real characters, played by Olivia Colman, Rachel Weisz, and Emma Stone: Queen Anne (who always makes me think of that chocolate box...), Sarah Churchill (Duchess of Marlborough), and Sarah's cousin Abigail Hill (Baroness Masham).

The director has chosen to engage the modern audience so has used several interesting techniques to draw their attention. Some of the language used - especially when the characters use profanity - consists of modern four-letter words which, although recorded as having been used at that time, would almost certainly not have been heard in the palace! They appeared out of place when I first heard them although if their intention was to startle the audience it certainly worked. But when I then watched the extras which accompany the main feature on the CD, I was assured that their inclusion was deliberate.

There are sections of the movie which are also quite rude (and simultaneously hilarious), from the very beginning when Abigail is ejected from a carriage by the boor who is her travelling companion to the hurling of rotten fruit at a naked courtier (as a joke!) to the sightings of bare breasts and buttocks several times in the course of the movie. This is certainly a film which is unsuitable for children - although I was surprised that the New Zealand rating is R13 as it has a higher age limit elsewhere. All the same, the "rude bits" are in context and the sex scenes that are included are not protracted or gratuitous. Much of the action is implied rather than explicit.

One of the main sources of hilarity is the role played by various creatures. Rabbits appear in several scenes, showing how much Queen Anne doted on them. There are also events that include ducks and lobsters - all bizarrely out of place in the royal palace. At the same time, there is no apparent evidence of any fouling on the floors. Since these are not creatures that can be housetrained, one wonders if the film was edited afterwards to remove all trace of droppings! However, since the entire movie is based on historically inspired impressions rather than accuracy, it probably does not matter.

The sets and costumes, which are sometimes historically accurate and sometimes wildly imaginative and anachronistic, are chosen for their visual impact. It is true that they are impressive to the point of being quite beautiful. Every so often, a scene is shown through a fisheye lens as though the intention is to give the impression of an intimate space within a huge open area. If the viewer can suspend disbelief and enjoy the movie for what it is - an impression of life at a time which was bawdy and grubby and rude while simultaneously very beautiful and very much alive - then the director has succeeded.

The plot is quite separate from the mechanics of the movie set. It is based within the machinations of politics which see two strong women competing for the support of the queen. The story is based on the real relationship between Anne and Sarah, and Anne and Abigail, but much of the detail is either imagined or unproven. Almost certainly, the detail is less important than the power struggle itself, which is timeless - hence the lack of compliance with historical fact as we know it. All three actors (Colman, Stone and Weisz) deliver equally powerful - but very different - roles which offer some insight into the role of rich and poor, male and female, at this time in British history.

Whatever the viewer takes from this movie, it cannot be stressed too much that this is a work that aims to entertain rather than deliver a history lesson about a real queen. The entertainment comes from the ambience of the sets, the amazing costumes, the dystopian elements of a society populated by animals and birds, and the high comedy provided by the antics of the courtiers. It comes too from the convoluted sexual relationships of people who see them as just part of their political aspirations and status in society. Watching this movie with an open mind is the key to enjoying it.

Score: 7.6
Product reviews for listing 2856: Life As We Know It
Directed by Greg Berlanti

After a disastrous first date for caterer Holly and network sports director Messer, all they have in common is a dislike for each other and their love for their goddaughter Sophie.

But when they suddenly become all Sophie has in this world, Holly and Messer must set their differences aside. Juggling careers and social calendars, they'll have to find common ground while living under the same roof.