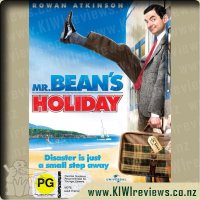 Disaster is just a small step away

Mr. Bean is heading to the South of France for a simple holiday in the sun. His voyage from London to the Riviera soon transcends into one of mischief and mayhem as he inadvertently creates havoc wherever he goes culminating in an unscheduled and riotous screening of his own video diary at the Cannes Film Festival.

Rowan Atkinson returns to the iconic role that made him a star - Mr Bean - the nearly wordless misfit who seems to be followed by a trail of pratfalls and hijinks!

Having not really enjoyed the previous Mr Bean movie I wasn't too sure about this one, but then heard a lot of people saying that it was going to be more like the TV series, so I figured I would give it a go, having loved the TV series.

Mr Bean wins a ticket to France, train ride included for there and back, however things go wrong, as they only can with Mr Bean and he ends up travelling with a young boy who he unwittingly separated from his father. So begins Mr Beans solo journey across France, then teams up with an aspiring actor and then again with the young boy. The three of them travel onwards to a movie premier at Cairns.

This was just like the TV series, very minimal talking from Mr Bean (which is half of what I love about him), plenty of jokes and mishaps and it is a great movie for the whole family to enjoy it. There's jokes in there for those who watched the show, jokes for the grown ups and plenty for the children to find fun and amusing making this a great family movie to watch with the family.