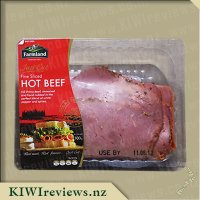 Prime beef eye seasoned in a blend of natural peppers and spices.

Made in New Zealand from local and imported ingredients. Gluten Free.

We don't gravitate towards foods that are 'hot', I'm getting myself used to hot foods in order to open up my food choices a little more, though my kids still aren't interested nor like spicy foods. This gives you just 100 grams of meat to enjoy, it did feel like the packet was a little big for its product though, I personally wouldn't be against my sliced meat being a little more squished if it means less rubbish to deal with. You can easily see the spices on the edge of the meat and there's a slightly orange/red tinge to the meat itself. I gave my kids a small piece each and none of them liked it, which was as I had expected.

I tried a piece on its own and found that the meat itself tasted yummy but I did find I could eat too much or I did find the heat a little too much to handle. The packet doesn't actually state what spices you'll find in the meat, something that could have been good to read. I decided to add some of this to a spaghetti and cheese wrap I wanted for lunch and found that overall it added a nice element to the dish, far better to be eaten with something but I still didn't love it. I chopped some up and added it to some mashed potatoes which wasn't bad but it wasn't a dish I'm dying to have again.

This wasn't tasty enough for me to want more and with no kids in the house who liked it, this product isn't in our future.

The hot sliced beef comes in a 100gram pack, and like all the other Farmlands meats I have been lucky enough to try, I was impressed by the amount of meat which the pack seemed to contain. The package has an eye-catching label to the left-hand side of it and I love how the right-hand side and the bottom of the package is clear and see-through so that you can see the product you are looking at buying before you actually buy it! In this case, this was a great thing to see as you could see the slight red tinge to the meat which to me suggested it would be slightly smokey and also the amount of pepper and spices around each edge of the meat, very evenly and generously distributed!

My family used this meat at lunchtime several days in a row, the first on wraps and then the next day on sandwiches. Both days the meat was served either way with a selection of cheese, lettuce, mayonnaise, cucumber, sprouts, and tomatoes all flavours which the meat worked well with. Having the spices and pepper around the edges of the meat meant that with every couple of mouthfuls you got an extra flavour hit, however, it was never overpowering in heat, it was just right and added a really lovely flavour to our otherwise plain and simple lunches.

This has to believe it or not one of my favourite meats from the Farmlands range and my partners too, Miss 6 not so much, not that I expected any different! My partner has already asked that I buy more this week at groceries which I absolutely plan to do, being such flavorsome meat I can see a lot of great ways in which to use it!

It's the "hot" in hot beef that intrigues me about this product. I love hot stuff, and will happily add chilli sauce to my meals to get that extra kick, but people will often give you a strange look when you do that. Enter the hot beef! Will it be a product that can appease my need for spicy, without having to add my own sauces to supplement it? That is the question.

The slices are very thin, even thinner than the corned silverside (which I found to have a really strong salty flavour), so I definitely had high hopes that thin slices would mean a much stronger flavour. Annoyingly, the slices ended up being so thin that the entire 100g of meat was a complete mass. trying to separate out a slice was a mission that ended up with just shredded pieces of hot beef slices, so I can't really comment on the size of the slices, because I still don't know.

Despite the thin slices, I didn't find the flavour to be overly strong. With a nice pink colouration and colourful soft rind of what appeared to be various peppers, the hot beef had a very smoky, earthy flavour. More smooth than anything else, there didn't seem to be much of a kick to it at all. It wasn't until after I finished eating a sandwich with the hot beef in it that I noted a very light tingle on the tip of my tongue, likely correlated to the presence of spice. For a product that was only 74% beef by weight, I was hoping to find much more of that weight was taken up by spices, but it looks like more went into water content.

As with the other products in the range, it comes in a thick plastic tray held in my a thin plastic sheet that comes off easily enough but has a tendency to tear, so it isn't easily replaced. The packaging also seems to be twice the size that it needs to be. So I would love to see that packaging design changed to be a bit more efficient. 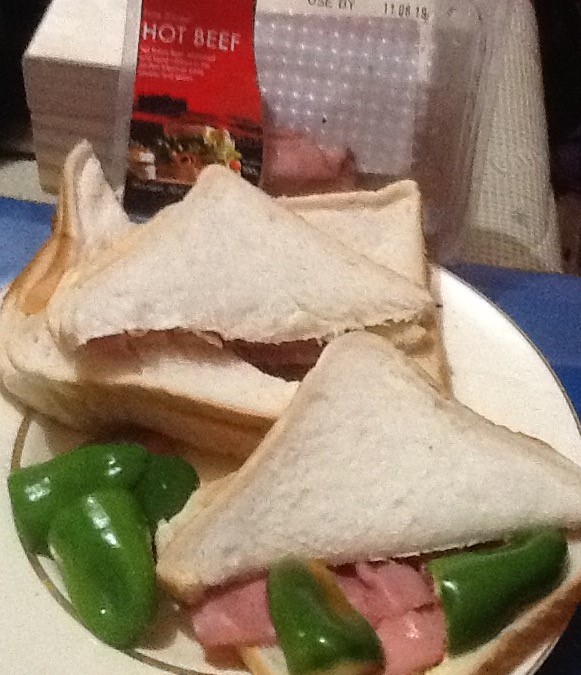 When I was a university student, I was permanently broke and permanently hungry. Just like every one of my friends! We quickly learned to make the most of the little cash we had and shared survival tips; as a result, not one of us succumbed to starvation and we all eventually graduated and moved on. Some foods were cheaper than others, so they were used as the base for all manner of meals - we were expert in discovering 101 new ways to cook an egg - and. amazingly, one of the cheapest sources of protein available at the time was good old beef.

I still use several of our home-generated recipes for beef, and one of my favourites is a simple lunch dish that was known in my circle as "Meat Sandwich"! How creative can you get? However, the lamb available to us then was too fatty to eat cold, and other meats were far too expensive to consider, so to us meat just meant beef. The process was straightforward. You used white bread as your base - as fresh and as thick as possible; added a generous smear of butter; then topped it with slices of precooked beef liberally sprinkled with chilli powder and a good shake of salt. It was served with large pieces of capsicum. And that was all - it was a meal in itself, and one enjoyed by every one of my student friends!

I replicated the recipe and it was just as good as I remembered it. The beef was already quite spicy, so I did not add any more chilli, but I did add a little salt. Because this product is fine cut, I added more than one slice of meat to each sandwich. Two slices were good, but three were even better. However, there is a surprising number of slices in each packet, so I was able to make several sandwiches to share with the family. They thought it was a little weird that I was preparing an "old school" lunch, but once they had tasted it, they approved. Miss Seven said she did not think it was too hot, while Mr Nine removed one of his slices from his sandwich as he thought two made it too hot. One was fine for him!

I would like to try this product with a fried rice recipe I have prepared in the past with roasted nuts on top. I can see that the spicy beef will go well with this recipe; it is originally a vegetarian dish made with rice, vegetables and butter. The combination is then grilled until the top forms a crust, and the nuts are added right at the end. I think that pieces of hot beef could replace the nuts to make a new flavour for the carnivores in our family. Can't wait to try it.