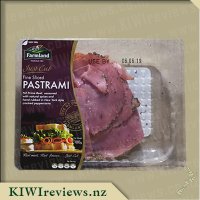 Disclosure StatementFULL DISCLOSURE: A number of units of this product have, at some time, been supplied to KIWIreviews by the company for the purposes of unbiased, independent reviews. No fee was accepted by KIWIreviews or the reviewers themselves - these are genuine, unpaid consumer reviews.
Available:
at selected supermarket

Pastrami is definitely one of those polarizing meats, with the quantity of pepper along the edges (what I will often just refer to as the rind) being the deciding factor between if it is loved or hated. This is usually because the peppers are such a strong flavour that it overpowers any other flavours present in the product. It's a similar reason as to why I hate capsicums/bell peppers, as it's all that I can taste if it is in a meal (I will actually either pick all capsicums out or simply not eat the food at all).

I actually have no idea what "New York style" cracked peppercorns are, but the intensity of the pepper flavour in this product seems much less compared to other pastrami deli meats that I have tried.

The meat itself is thin but easy to separate and is smoked, which gives it a nice purple pink colouration, and earthy flavour which does pair with the peppers nicely. There is still quite a large contrast between the flavour of the meat itself and that of the rind, which will catch out the meat-eaters that aren't too keen on the peppers, but it's easy enough to take care of that by just ensuring you get both parts in each bite; not too much of one part and not enough of the other.

What this product would work well in, is a pizza. For the same reason that pepperoni works well, but the rind would put an extra kick in there that would be present but still tempered by the pizza dough.

I enjoy pastrami but had stopped eating it because I was finding that the different brands were putting too much pepper on the edge of the meat and simply don't like too much pepper. The packet says that you'll get two servings out of it, though I only use a slice or two at a time, so this went a little further. Opening it up, my kids each tried a piece and all three told me that they didn't like the meat, with all of them saying it was the peppercorns on the edge and even if they scraped it off they then didn't like the taste of the meat.

I gave it a try as it was and found that I didn't love it, it was just ok flavour wise but I did like that the peppercorns didn't overpower the meat at all, which was better than other brands I've tried in that regard. I had grabbed myself some rice crackers and tzatziki dip to munch on, so I smothered my cracker with the dip and then ripped up a slice to put a small bit on the cracker. This didn't really do anything for me, so I did another cracker but this time added an entire slice of pastrami to the cracker and that tasted far better with everything going better together.

Whilst this did better in the peppercorn department I didn't find the rest of it tasted good enough to have me wanting to buy more.

Although I am not much of a fan of spicy foods, I do really like Pastrami so I was pleased to see this yummy style of meat available for review, especially through the Farmlands brand which I have grown to love over the past few weeks as I have been reviewing its products.

Like the rest of the Farmlands, meats range the Pastrami comes in an attractive plastic packaging which is nice and easy to open. One side of the package has a clearly presented label which tells you what the product is and has a lovely image of a very tasty looking sandwich, I love how Farmlands uses a different coloured background on each of there different meat products as this makes it easy to spot what you are looking for on the shelf before you even see the wording. Looking through the clear plastic you can see the meat which you are getting, in this case, Pastrami. I loved seeing the even peppery coating on the edges of the Pastrami which was plentiful and the lovely rich brown/red colour of the meat itself.

I happened to have some pork fillets out for dinner on the night I received my review goods so I decided rather than eat my pork as is that I would wrap each piece in the Pastrami before placing it in the oven to cook. Within 30minutes the meat had cooked through and was made even more tender and flavorsome than usual from the juices and extra flavours of the Pastrami, served with a side of corn and mashed potatoes with gravy this was a very welcomed meal especially on such a horrible wet evening and my partner was impressed that I had tried something new with the meat. I was a little worried about Miss 6's reaction to the pepper but luckily she said it wasn't too bad and that she would get a glass of water to in case it got a little spicy.

For lunch the following day I sliced up the remainder of the Pastrami and added it to some homemade 'healthy' sausage rolls I was making in place of the bacon which the recipe called for, and I also omitted the pepper as I felt the Pastrami had a sufficient amount on its own. The Pastrami worked wonders with the pork mince and the grated carrots and onions as I knew it would. The sausage rolls were full of flavour and not to dry without the bacon and were enjoyed by everyone.

This is one of my favourite Farmlands products so far and one which I will definitely buy again. 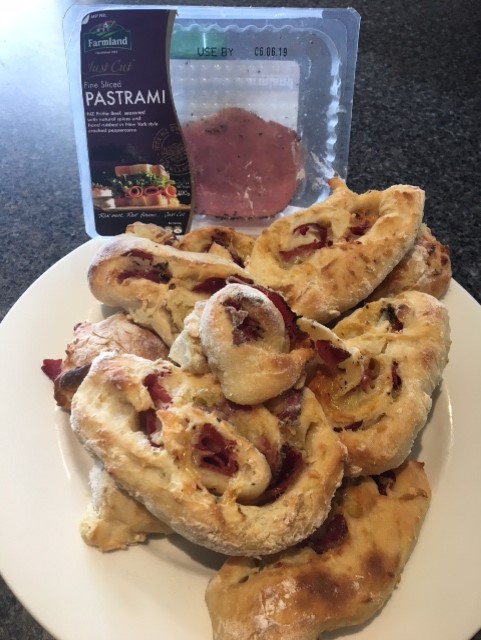 I last ate pastrami when I went to breakfast at Zabar's while staying with my cousin in New York. I was assured that their pastrami was the best available, better even than that sold at Katz's, although apparently none of the locals can actually agree on that. I took from this advice that they were both probably pretty good, but Zabar's was closer so that is where we went. The pastrami was beautiful - spicy hot but not unbearable, and with a strong beef flavour that made us want to ask for seconds (and possibly thirds!) So Farmland had a strong rival for their product. I was hoping it would measure up.

Apart from not being quite as spicy as the New York version, this was pretty good. I ate two slices slowly, one with a slice of bread and one on its own - and was reassured. They were just as good as the originals, living up to my expectations without difficulty. I had already decided to use the rest of the pack with some grated cheddar to make savoury pinwheels - this way the whole family could try a little. And the recipe would be simple enough for Miss Seven and Mr Nine to try. I would oversee the process, but they would do the preparation and baking.

We started with equal quantities of self-raising flour and plain unsweetened yoghurt. This was mixed together by the children, each taking a turn while the other added extra flour when necessary. When it was springy, they tipped it on to the bench and rolled it out to form a thin scone-like oblong. They then added some grated cheese and the rest of the salami, torn into smaller pieces; then the oblong was rolled up, cut into slices, and spread on an oven tray to bake. Nothing was measured; we just added what we thought was about right! The pinwheels were cooked until they were brown on top - even the cooking time was flexible!

I had kept two small pieces of salami aside for the children to taste while the pinwheels were cooling. Mr Nine turned his nose up at the peppercorns; he did try a little but said it was too spicy and he probably would not eat any. Miss Seven said it was about right for her! But when it came to eating the still warm pinwheels with a little added butter, it was a different story. The flavour of the salami was still strong, but the pepper was much less evident - in fact the amount of meat and cheese in relation to spices was just right. Mr Nine revised his opinion completely and both he and Miss Seven were highly impressed. The not-measured mix yielded 16 pinwheels and the five of us finished the lot for lunch. I am sure they would have been nice cold too, but we did not get the chance to find out.

Use it on absolutely everything. Great on pulled pork, roast chicken, spicy wedges or even in your mac n cheese.

A distinctive blend of smoked paprika, horopito and mustard. Our signature rub.