« The Curse of the Weeping Woman review 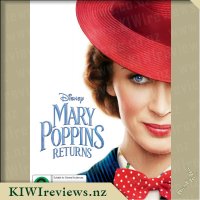 The film, which introduces three new Banks children, played by Pixie Davies, Nathanael Saleh and newcomer Joel Dawson, also features Dick Van Dyke and Angela Lansbury. The film is set in 1930s depression-era London (the time period of the original novels) and is drawn from the wealth of material in PL Travers' additional seven books.

In the story, Michael (Whishaw) and Jane (Mortimer) are now grown up, with Michael, his three children and their housekeeper, Ellen (Walters), living on Cherry Tree Lane. After Michael suffers a personal loss, the enigmatic nanny Mary Poppins (Blunt) re-enters the lives of the Banks family, and, along with the optimistic street lamplighter Jack (Miranda), uses her unique magical skills to help the family rediscover the joy and wonder missing in their lives. Mary Poppins also introduces the children to a new assortment of colourful and whimsical characters, including her eccentric cousin, Topsy (Streep).

54 years ago Julie Andrews graced the world as Mary Poppins, it is a film that has gone down in history as being one of the most beloved films of all time, as well as upsetting its creator hugely. So it's no surprise that it has taken this long for us to get a sequel, now helmed by Emily Blunt. When I first heard the news I was surprised, knowing the history, but also very eager to see where it might go. I will be honest, I wasn't too sure about Blunt in the main role but when I heard her singing in My Little Pony: The Movie, I was excited. As the cast list grew so did my families anticipaton as all of my kids enjoyed the first just as much.

We watched this when it hit the big screen and it came out on DVD just a couple of days ago so I nabbed the household a copy and we settled down to watch it again. I love all the different homages to the original throughout the film, from the oil paintings in the beginning credits, to a few notes here and there from the original soundtrack, the kite using a sash from the first film and the original Jane Banks asking for directions to a house on Cherry Tree Lane. Due to the nature of some of the events in the film, it has its fair share of special effects required to make it believable and it they do the job well, maintaing the feel of the era whilst looking seamless.

Blunt is brilliant as Mary Poppins, she brings her own slant to the character but isn't too far from the original film, I recall reading that she portrayed hers to be closer to the book, either way I really enjoyed her in the role. The three young actors playing the children did a fabulous job in their roles, you could tell they were children who have had to grow up too quickly but still need to be kids and have fun. The musical numbers were great fun, "The Cover is Not the Book" is one of my favourite songs and very apt because some great books have horrible covers. "Trip a Little Light Fantastic" was also a lot of fun has had my girls singing it again and again.

I really enjoyed this film and I find myself hoping that Blunt will reprise her role for another film.