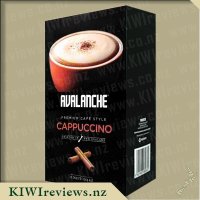 Disclosure StatementFULL DISCLOSURE: A number of units of this product have, at some time, been supplied to KIWIreviews by the company for the purposes of unbiased, independent reviews. No fee was accepted by KIWIreviews or the reviewers themselves - these are genuine, unpaid consumer reviews.
Available:
at selected leading supermarkets

Cappuccino : A classic combination of robust espresso topped off with a frothy layer of foam. One for the traditionalists.

One coffee addict reporting for reviewing duty! Since having to cut back on my daily Cafe coffees, I've needed a reasonable supermarket alternative that makes me feel like I'm still having a treat. At $4 a box, they certainly hit the mark price wise so on to the rest of it.

The sachets themselves have a nice and appealing aroma and I was pleased to note that there was no hint of cinnamon as the box's picture might have suggested (I prefer mine with chocolate). Flavour wise it was a nice coffee flavour, something that I have come to expect from the avalanche brand. I did find that you have to stir it continuously while pouring the hot water in otherwise you risk lumps, small lumps but lumps none the less. It does create a nice foam on top which I like and makes me feel like I'm really having a treat not just an instant coffee.

Overall, I did enjoy and as I mentioned it hits the mark price-wise. It probably wouldn't be my preferred flavour only because I enjoy the Vanilla and Caramel Latte flavours in this same brand, that is the only reason I have marked the personal choice a little lower. I have since started buying this brand regularly and like to keep a few flavour options on hand. Highly recommend this product.

I never used to be a coffee drinker as I always struggle to find one that isn't too strong and that I can enjoy until I discovered sachet coffees. I have tried a few brands and flavours and some are nicer than others. I do enjoy a good cappuccino so this was a good flavour to try. I was a bit disappointed that when I made myself a cup to find that not all the powder dissolved and I was left with a few lumps floating on my coffee, I grabbed a spoon and gave it another stir to see if that helped, it made the lumps smaller but there were still lumps.

I can't fault this coffee for flavour, it is nice and not too strong and I know I will drink it again and if I can find it in the supermarket this product will be added to the trolley. The box is appealing to the eyes, great picture on the front and easy to read the information on the box(I'm starting to find I struggle if the print is too small or colourful) and the illustrations are cute. It is great to see a company that suggests you recycle and one that hasn't put a huge amount of extra stuff on the box like the history of the company. In today's world I kind of expect them to list their website but Avalanche don't so that is something they might like to add to the box.

I am a huge coffee drinker...and I do mean HUGE! it is almost my staple diet, which to be honest is a little bit unhealthy, but I love the stuff. I applied for a box of these Avalanche sachets because I have not tried them before. I really liked that the RRP was only $4 for a box of 10, and I am yet to find a make at home cappuccino sachet that I actually enjoy. Most others are either far to strong, taste weird, cost far to much or have an odd flavour.

The box is a bit on the boring side. Not eye catching or impressive. But this is not something to whinge about as lets face it, this is a budget conscious brand and you are not drinking the box. It is easy to open and the sachets inside are really lovely white sachets that I actually really like. They don't look budget at all. In fact I thought the simple white sachets was really quite elegant.

Most cappuccino are made with a sprinkling of cinnamon on top. I do not like cinnamon on any of my coffees so checked the ingredients list to see if it was mentioned and am happy to report that it was not. I also noticed that is said to use 150mls of water to make. I ignored this, as I don't think that makes enough haha instead preferring to use my giant mug that I always use. I also added 1 teaspoon of sugar as I generally do, and I mixed a little milk into the powder to make a paste before adding the water. I can't wait for a hot drink to cool down so the added milk would mean I could consume straight away.

Pouring the water in and stirring at the same time resulted in a wonderful creamy and frothy top to my drink which I was instantly happy about. While the coffee flavour could possibly have been a little stronger for me, I was really happy with it. It is actually yummy. I like it! the little added sugar gave the perfect sweetness and the milk made it perfectly creamy. I'm sold. This is now going to be a regular on my grocery list. Seriously, I'm so impressed. I will definitely be purchasing other flavours too.

When a sweet chai latte is not an option for a hot drink when out and about, my fallback choice is a cappucino, hold the cinnamon on top (I find it gets a bit gritty and doesn't add well to the drink). The box is simple in design and rather understated, looking at it it isn't a product that would catch my eye or make me too interested in trying it even with the 'crafted in New Zealand' on the front of the box. Opening the box up you see the nice white sachets in the box, and I far prefer their appearance to the box that houses these drinks.

I always have to remember to check how much water is needed because I like to fill my cup nearly to the brim to have a nice long hot drink, but with this it states to add only one hundred and fifty mls, so something necessary to remember each time I made this. When made there is a nice little layer of froth but at the 150ml, I didn't like the taste too much. I then made it my usual way, one satchet plus a teaspoon of sugar and filled nearly to the brim. It still gave a layer of froth and taking a sip I still got a nice strong hit of coffee though there was a slight aftertaste that I didn't quite like. I wouldn't pick this over other brands when I see it on the store shelves but if offered it at a friends I would drink it if no other options. I remember cappuccino from my student days when it was the sophisticated hot drink of choice and only the trendy coffee bars sold it; it came complete with a little dusting of cinnamon on top. I checked the list of ingredients on the Avalanche box but cinnamon was not listed so I decided to test it both with and without cinnamon added. So I made two cups and have to admit I liked it both ways. It had a strong, robust coffee taste plus the creaminess of added milk which needed just a little sugar (I added half a teaspoon) to bring out the flavour.

I asked a group of colleagues and friends to join me in testing out this coffee. I expected there would be lots of different reactions so I did not tell my testers my own impressions; each of them simply got a sachet to try without any information as to what was in it, or what I expected of them. All I asked was to be given honest feedback, both positive and negative.

As it happened, there were no negatives whatsoever. All of them really liked it and said they would certainly purchase it again. They mentioned in particular the strength of the coffee - not too weak - and the delicate aftertaste which lingered long after the cup was drained. The frothy appearance was also seen to be a plus - as one of the tasters remarked, it was visually attractive and also appealed to her sense of smell as the aroma of hot coffee was too good to resist.

I was intrigued to find that, although the box was listed as containing 10 sachets, there were actually 11 inside. Not that I am complaining; I drank two sachets, five friends drank one apiece, and there were still four sachets left. I may not be the world's best at maths, but I came up with 11 in total no matter how much I tried to tweak the numbers. I like it when this happens; it feels as though I have been given a bonus just for trying the product!

I think it is an ideal drink for a frosty night. It is meant to be made with water that is not quite boiling, and by the time the powder has been mixed with the water, it is at just the right degree of heat. I certainly felt a lot warmer after I had finished it, and the impression I got from my friends was that they experienced the same effect.

Fire up your evening... and your grill, for some Smokey and sizzling Barbecue! Don't forget to uncork a bottle of our Libero Chianti to enrich all those savoury flavours!! Our Chianti pairs exceptionally well with grilled meats and long summer nights under the stars!

Smouldering, with a deep dark red colour, this vintage is medium bodied and the palate has flavours of dark cherries infused with dried herbs over earth and spicy cedar, with fine-grained tannins. A savoury finish, simply Chianti at its best.

This wine is organically produced.