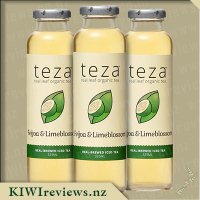 The Teza range of juiced teas was developed with Kiwi tastebuds in mind. Founded and now run by thirty-something couple Joe Gehrke and Daphne Raj, the range prides itself on using premium and all-natural ingredients. Real leaf tea is batch brewed with botanicals such as ginger root and then blended with real juice and best of all it is made right here in New Zealand! The emphasis of the Teza range is on 'taste' and 'naturalness' with the added bonus of looking good too.

Both the bottle and cap are recyclable, and the used tea leaves from the brewing process are sent to community garden groups and worm farms to minimise waste.

Feijoas are truly the international fruit of mystery. They were named by a German after a Portuguese-Brazilian botantist. They are found in South America and New Zealand, and their name sounds like a naughty word from Sweden. They're masters of disguise - is it a pineapple? Is it a guava? Is it simply a kiwifruit after a shave? They're elusive - only on the scene for a short time and then the relationship's over and you have to date other fruit. Teza is all natural. if you see any sediment, shake it like maracas, Amigo!

Teza ice teas hold two not so secret desires of mine in a yummy summer drink - the taste of iced tea, and the refreshing flavour of fruity goodness!

I first tasted Teza's Feijoa and Limeblossom ice tea, at a local cafe while out for a coffee catch up with the girls. I love the bottles Teza use. They are a good size, a nice feel in your hand, glass with a nice fresh seal lid. You do want to give them a bit of a shake before you open them. There is a bit of sediment that sits on the bottom of the bottle.

I dont know why, but when something tastes that good you just can not slam it down your throat. I savoured every last drop of that bottle. It lasted a good 2 hours, even after the chill was gone and the contents were luke warm, I still had that delicious surprise feeling whenever I took a sip. Buy it again? already have. It does help that I am a feijoa fiend.

I do not like feijoa, so sadly this one just did not go down well for me. I did try it but was not able to finish the bottle. The feijoa flavor is much too strong for me, and the fact I am also not a tea drinker, but this one was a hard one for me to down.

I like though that Teza are an all natural product, and for lovers of feijoa and tea I am sure this one would be a favorite for many, but sadly for me it just did not agree.

I'm not a feijoa person, in fact I really can't stand them, but following in the concept of giving new things a try I delved into this with an open mind and relatively open tastebuds.

Sadly my dislike of feijoas may have tainted my tasting of this, as all I could really taste was the feijoa, and really not much else. However to be fair to the drink I did manage to detect a few other tastes, however they were by and large too subtle to make any difference for me.

So sadly my attempt to expand my taste horizons fell short on this attempt. But if you like feijoas, or of you have never tried them before give this a try, you never know you might actually like it.

Upon opening this bottle, you can smell the scent of tea and feijoas.

We initially sampled this one at room temperature, and then let it chill for a while, and it is definitely best drunk cold.

The taste of feijoas is quite a strong taste, so if you dont like feijoas or not an overall fan of them, then perhaps this drink is not for you.

I personally like the simple and plain bottle in which it came in, that you are able to recycle also.

An interesting name and taste to this particular flavour, it had quite a bold feijoa sweetness with a hint of tanginess which I can presume came from the limeblossom as I have no idea what limeblossom is supposed to taste like. There was only a mild tea flavour with this one.

This was also a very refreshing drink to enjoy on a hot day, with a very clear and crisp flavour.

Feijoas have always been one of my favourite fruits, but I've found most food that claims to be "feijoa flavoured" tends to only have the barest hint of it, so I was curious to see how this particular drink would fare. Removing the lid, I was instantly greeted by a full on feijoa aroma that instantly had me wanting to see if the taste lived up to the promise the smell of it gave. The first sip was a wonderful crisp, refreshing burst of full on fruity, sweet feijoa flavour with barely any hint of anything else, and it made me want more! It tasted more like a lovely juice rather than any kind of tea drink I've tried before.

A bit further into the drink, I noticed a strange, and slightly unpleasant, slightly bitter taste creeping in. Giving the bottle a good shake, mixing the tiny amount of sediment into the rest of the drink, the bitter hint disappeared and I was left with just that wonderful feijoa taste. After having now tried the other flavours of the Teza range, the Feijoa and Limeblossom would definitely be the sweetest of the flavours, and also after having tried it both chilled and at room temperature, I would definitely recommend drinking it straight from the fridge. When chilled, this drink is crisp, refreshing, and definitely has a stronger, sharper feijoa flavour, that falls a little on the bland side if left to warm up to room temperature at all. I am strongly hoping this drink makes its way into the permanent range, rather than disappearing after its term as a "Limited Edition" finishes up.

If you like this particular fruit, then this drink is definitely one to give a try... and even if you're not a feijoa fan, give it a try if you enjoy a cold, sweet, refreshing drink on a hot summer's day. You never know, you might be pleasantly surprised!

I had wanted to try the range of these drinks, however I am not a fan of feijoas, so I asked hubby to sample this one for me...
The drink is simply and well presented and the eco-friendly packaging is great for those who think of recycling.
Upon opening the bottle there is a strong smell of the feijoa which was mouth watering and tasted even better, I found it better to drink this slowly as, one, I could have drunk all of it in one go, and two when I did drink a a lot of it there was a strong after taste of the tea that lingered longer than the feijoa, I couldn't taste the limeblossom, however that was probably because I dont know the flavour.
The bottle recommends shaking to mix the sediment but I didnt have any issues here so it wasn't a problem.
Over-all a nice crisp refreshing drink that went down far too quickly, now I just need to hunt down some more...

Though I am never a fan of Feijoa, I have to admit I did enjoy the Feiloa and Limeblossom Teza. Best served cold and sipped after a long day at work (which is what I did) and away from the wife and kids who will also help themselves to your drink and interupt your 'Me Time'.

The Lime blossom, I suspect, is Lime Flowers (Tilea europea) and nothing to do with Limes or even citrus in general, so those wanting to taste limey notes in the feijoa will be disappointed; however the flavour of the product is outstanding overall. Assuming it is Tilea europea, then this has some quite powerful relaxing properties, and can help kids sleep (amongst other thing) and so adding this herb to the formula can make a nice relaxing drink after a stressful day.

As said previously, I am no fan of feijoa; however that would not put me off buying this, making the assumption the 'Limited Edition' ends up as something more permanent.

I was hoping for a lot stronger feijoa flavour but as a friend pointed out to me, that would have been coming on too strong and would have masked the subtle flavours of the tea and limeblossom. No idea what limeblossom is supposed to taste like so I dont know if that flavour comes through or not.
This was a great sized bottle. Perfect as a one-slug drink on a scorcher of a day but also a nice amount for a sip-away-the-afternoon drink as the sun goes down slowly.
There was very little sediment in the bottle which was good, but it was nice to see some as it is an indication of "real fruit" to me. You never see sediment in "fake flavour" drinks unless they are chemical residues.
All in all I really enjoyed this flavour. It was also really nice poured slowly over balls of blended frozen fruit as a refreshing dessert treat.

Undoubtedly and unquestionably my favourite from the Teza range, this is a delightful drop that will be subtle on the tongue, but full of bouquet as you crack the lid and get that full-on feijoa smell we all love.

I have to admit, despite the blurb clearly showing an infusion of limeblossom... I have no idea what limeblossom is supposed to taste like, so couldn't actually say with certainty that it was there. But honestly, I could care less, but only if I put in a lot of effort to... the feijoa was what I was after, and I got it, square in the tastebuds.

Overall, an absolute hit for me, and one I was keen to shove at the Cheesecake Lab we are now running through our official Facebook page. Unfortunately, it didn't pan out quite as well as hoped, with all the delicate flavours basically vanishing, leaving it a very plain cheesecake indeed. In the bottle, there was visible sediment, but after a quick shake it was well dispersed and didn't affect the drink at all. Stuff like this could make a tea drinker out of me yet...

Organic Apple sparkling wine. This lends itself to a scrumptious cider with a refined apple taste.