ProdID: 6741 - There Was an Old Mozzie Who Swallowed a Lady
Author: P. Crumble 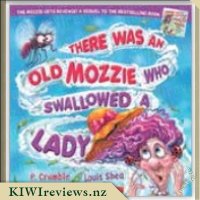 There Was an Old Mozzie Who Swallowed a Lady product reviews

The mozzie is back! He's bigger. He's badder. And he wants revenge!

It's not only the old lady in his sights - this tiny insect is out to get anything that has ever taken a swipe at him! Just how much can one mozzie swallow?

Find out in this hilarious sequel to the bestselling There Was an Old Lady Who Swallowed a Mozzie!

Everybody knows the story ' there was an old lady who swallowed a fly', well in a much needed (but don't know why I never thought of it before) twist, someone has rewritten the story, only this time...the flys doing all the crazy swallowing. I was excited to get this from KIWIreviews. We have not had any books in a while and my daughters been asking for this book since she first became aware of it.

The cover is appealing to all reading ages and for both sexes. Like tbe story/song itself, the cover is really rather busy. I like the business of the cover matches the story and gives an indication of what you can expect. I do admit though that for some reason I expected a lot my humor, but it didn't happen. It was not as funny as I assumed it would be, and I felt a bit sad about it. I assumed though that my daughter would find it far more funny and appeaaling than I did (perhaps I'm getting old).

Nope, I'm not getting old. Phew! Miss 8 read the book to me. She loves the original. She did not seem to enjoy this as much. don't get me wrong she still giggled now and again but for the most part she fdowned, shook her head and said nope, just nope lol its not the same nope. I reminded her its not meant to be the same: her beef though was that it did not all roll off the tongue as easily as the original and some of it just didn't sound right. It was funny but it wasnt as easy to read as the old lady and the fly. I thought about it, and yup that is it! That is exactly why it wasnt as enjoyable. Put that aside thougg and its a greaf wee read for kids :)

I remember the song "There was an Old Lady Who Swallowed a Fly" from when I was growing up. My Auntie taught it to me and my siblings and I were in hysterics as we sang it. In recent years, Scholastic has brought out quite a range of takes on that song. I am still not sick of them! Each one has its own character and humour. All as ridiculous as each other! "There was an old mozzie who swallowed a lady" is the sequel to "There was an old lady who swallowed a mozzie". I haven't been lucky enough to read the first one yet but it is fun to think that the mozzie has a chance to get revenge.

The front cover of this book grabbed my attention. The kids loved it too. The old lady with her purple hair and wrinkled up face drew us in. We laughed quite a bit before we even opened the book up. We were not at all disappointed when we opened the book. The illustrations oozed colour, fun and energy. The kids had a ball simply looking at the illustrations. When I started to read it, I couldn't help but sing. I think it would be impossible to just read it, the song takes over whether you like it or not! Miss three and Mr five joined in, without fail, with "That's just crazy!" at the end of each verse. It got rather loud in our house as we sang the story, the children got very excitable and were having so much fun!

Near the end of the book, Miss three got a bit concerned when she found out that the mozzie was going to explode. She wondered if he would be ok or if he would die. She is rather sensitive to things being hurt or dying. Mr five was able to point out to her that the last page shows the mozzie alive and well. It is worth checking out the fact that the toad is now chasing the mozzie - do I see another book to come in the series?

The search seems to be taking them to Vienna, and they hold a coded piece of Mozart's sheet music that's key to finding the next clue. But tailed by a pack of power-hungry relatives, Amy and Dan can't see if they are sailing toward victory... or straight into a ... more...