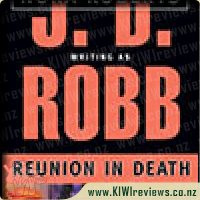 At exactly 7:30 p.m., Walter Pettibone arrived home to over a hundred friends and family shouting, surprise! It was his birthday. Although he had known about the planned event for weeks, the real surprise was yet to come. At 8:45 p.m., a woman with emerald eyes and red hair handed him a glass of champagne. One sip of birthday bubbly, and he was dead.

The woman's name is Julie Dockport. No one at the party knew who she was. But Detective Eve Dallas remembers her all too well. Eve was personally responsible for her incarceration nearly ten years ago. And now, let out on good behavior, she still has nothing but bad intentions. It appears she wants to meet Dallas again -- in a reunion neither will forget

Reunion in Death is one of the more gut-wrenching books in the In Death series.

Dallas get called to the scene of a murder and it doesn't take long to find out who the killer is, and it is someone that Dallas sent to jail almost ten years earlier. Julie Dockport has used brains and sex to get herself released early, but Dallas knows better. The race begins to stop Dockport before the next victim is Roarke.

Part of the investigation requires that Eve return to Dallas to conduct an interview even though Dallas is the last place she wants to return to as that is where she was found, in an alley way, physically and sexually assaulted as a child. She relives some of the horror, much to Roarke's agony.

This is a great book for Dallas as it helps her sort out her past a little bit, in that she can move on from some of it or at least reconcile it and move on from it, even if just for a short time. One of my favourite in the series in way of character development.

Twelve years ago, Eve Dallas was just a rookie NY cop when her instincts led her to the apartment of Isaac McQueen, a man she discovered to be a sick murderer and paedophile, who was keeping young girls in cages. Now a homicide Lieutenant, Eve is one of the most distinguished officers in the city - and then she learns that McQueen has escaped from jail.

Bent on revenge against Eve and with a need to punish more "bad girls" McQueen ... more...