« Tombquest 1: Book of the Dead review

The Strain - Season One review 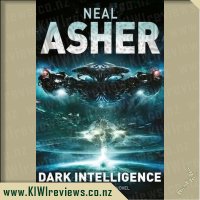 One man will transcend death to seek vengeance. One woman will transform herself to gain power. And no one will emerge unscathed...

Thorvald Spear wakes in hospital, where he finds he's been brought back from the dead. What's more, he died in a human vs. alien war which ended a whole century ago. But when he relives his traumatic final moments, he finds the spark to keep on living. That spark is vengeance. Trapped and desperate on a world surrounded by alien Prador forces, Spear had seen a rescue ship arriving. But instead of providing backup, Penny Royal - the AI within the destroyer - turned rogue. It annihilated friendly forces in a frenzy of destruction, and, years later, it's still free. Spear vows to track it across worlds and do whatever it takes to bring it down.

Isobel Satomi ran a successful crime syndicate. But after competitors attacked, she needed more power. Yet she got more than she bargained for when she negotiated with Penny Royal. She paid it to turn her part-AI herself, but the upgrades hid a horrifying secret. The Dark AI had triggered a transformation in Isobel that would turn her into a monster, rapidly evolving into something far from human. Spear hires Isobel to take him to the Penny Royal AI's last known whereabouts. But he cheats her in the process and he becomes a target for her vengeance. And as she is evolves further into a monstrous predator, rage soon wins over reason.

Will Spear finish his hunt, before he becomes the hunted?

I have been too long without my 'fix' of Vitamin Polity. While I loved reading Asher's "Owner" series, I still missed the uber-tech and sheer bloody-mindedness of the AIs in his Polity universe. Thus, it was a great pleasure to receive a copy of this book for review. I had been following Neal's comments about it on twitter, and I was dead certain I had a fair idea of the plot. How wrong I was!

An interesting commentary on the shortcuts taken during times of extreme conflict in order to maximise ordinance production, and the aftermath of unused and unexploded ordinance left behind in the warzone, some of the main characters in this story are clear analogues - Penny Royal, the rogue AI turned homicidal - is a rushed patch-job, built from recovered and recycled pieces of fractured war drones in the height of battle, by a sentient constructor station that is itself a few quarks short of a full positron. Having spent some time living near, and befriending some of the crew in, a military base, I heard many stories about ammunition that was built to a deadline and a budget, rather than a standard of quality, and the consequences of its use in the field. Penny Royal reminds me of many of those stories - hand grenades tagged as 5 second fuses that would detonate in anything from 2-9 seconds, ammunition with faulty detonation caps that would fail to fire until up to a second later, when the grunt had the breech open trying to clear the jam, and the likes. You never knew if pulling the trigger or pin would mean the end of your target, or you.

Another character that had me thinking of improperly handled battlefield tech was Riss, the assassin drone that was made redundant by the end of the Human-Prador conflict. Hardwired to kill her designated enemy, but left impotent by decree-from-above, she puts me in mind of the fields of still-unexploded landmines that plague old warzones to this day.

I adored this book, and it thrills me to know it is merely the first of a series. While Penny Royal gives me the screaming-willies (I didn't sleep at ALL the first night after this book arrived!) it's a fascinating character, full of internal conflict and a set of ethics that switch between two self-consistent but mutually-contradictory states. In it's 'caveat emptor' state, it's much like the darker tales of middle-eastern Djinns (aka Genies) or the European tales of pacts with the Devil - You will get what you wished for, but there will be a hidden twist that turns your wish sour. In Penny's 'patching bridges' state, it's just creepy and ominous, forbidding and terrifying, but not actually capricious.

I loved the revelations regarding the true origins of the format Isobel is being turned into, and the way Penny honours it's new obligation to her, and how it also reveals some astounding background info regarding the Spatterjay virus, Jain technology, the internal and hidden politics of the Polity AIs, and so many other aspects of the Polity universe that I have wondered about for ages.

Overall, if you have EVER liked any of Neal's works, you will probably love this one too... though I warn you, it is dark in more than just name. There are some very personal undertones that have crept into this tale, and understanding the author helps me to cope with the story's very introspective and deeper themes. Don't be surprised if this tale leaves you feeling a little 'disturbed' in places.

When Lisa's cat Picasso gets lost within the paintings at an art gallery, it is up to Lisa to find him. Can she trace Picasso's steps through the history of art?