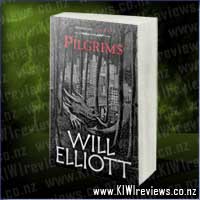 Eric Albright is leading a normal life until a small red door appears under a train bridge near his home. Then a ghostly being wakes him in the dead of night, with a message from another world: You are Shadow.

In Levaal, the world between worlds, the dragon-gods grow restless in their sky prisons, and the Great Spirits struggle to contain them. Vous, the world's Friend and Lord, simmers in madness as he schemes to join the ranks of gods. He and the Arch Mage have almost won their final victory over the Free Cities. A dark age dawns.

But Eric and his friend Case are now Pilgrims, called to Levaal for a battle more ancient than the petty squabbles of men. And they will learn why some doors should not be opened... .

Eric stumbles upon a door to a world of magic and, leaving only a note to his drunk homeless friend, leaps head first into a world of adventure - literally! The world he discovers is a lot darker than your average fantasy realm, as is foreshadowed by the massacre in the opening chapter. I found it more convincing for that fact, though less like the sort of world I would fall in love with and want to spend a long time inside.
My favourite character by far was Case, Eric's drunk homeless friend, who seems to approach everything with a resignation that makes him strangely adorable - especially in a world where people seem to be constantly killed off in some understated way or other. Case's death wish made me conversely confident that he, at least, would survive. The other reason I liked him was that he alone seemed to have a sense of right and wrong. While, early in the story, Eric constantly made choices to benefit himself, Case argued for the rights and well-being of others. He seems, at this point in the trilogy, far more worthy of being the hero than Eric!
All in all, it was a solid fantasy aimed fairly firmly at the male readership. If you like 'dark' and 'gritty', definitely give this one a chance.

Guided by the dragon Tintaglia, they came from the sea: a Tangle of serpents fighting their way up the Rain Wild River, the first to make the perilous journey in generations.

For Thymara, a Rainwilder born with scales and claws, the return of dragons symbolises the return of hope to her war-torn world. Leftrin, captain of the liveship Tarman, also has an interest in the hatching; as does Bingtown newlywed, Alise Finbok, who ... more...