The Dukes of Hazzard review 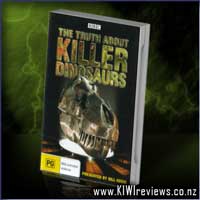 The fiercest Jurassic beasts are accurately brought to life and pitted against each other in a PRE-HISTORIC DEATHMATCH.

We knew some were enormous, we knew some were ferocious... but only now are we able to tell the truth about dinosaurs. New research has enabled biomechanics, CGI and special effects to create the most accurate portrayal ever of the most brutal killers in history. Watch in awe as every scientific process is used to...

• Analyse the vision, brainpower, speed, agility, agression and defences of these great creatures.

• Set dinosaur against dinosaur in their natural habitat - the ultimate battle of the titans.

• Reveal the facts and uncover the myths about dinosaurs and their prehistoric world.

If you think you know about dinosaurs, then this show is for you. Not only does it dispell a few myths - it blows damned great holes in a lot of the scientific theory and assumed knowledge about the dinosaurs.

Bill Oddie seems a surprising choice of presenter for a natural history program; however, knowing that Bill Oddie is a keen ornithologist as well as a comedian, he somehow brings a lightness to what could otherwise be a very dry subject, yet he still manages to instill a modicum of gravitas into what could easily become a flippant subject when trying to produce a program, such as this, for the masses. On the whole, I could not imagine anyone else doing his job, and I look forward to seeing Oddie and the BBC natural history team produce further works in the series.

Far from relying on supposition, the BBC team speaks to experts in their fields and produce working models to illustrate the sheer might and power of their chosen subjects. Everything they do is done in conjunction with supervising scientists and, well... WATCH IT.

The BBC are the undisputed masters of Natural History programming, and you can be safe and sure that with BBC stamped on the case, you have made a wise purchase. At under $30, this is excellent value for money and a worthy addition to the DVD collection of any natural history buff.