« The Lives of Christopher Chant review

ProdID: 6129 - The Magicians of Caprona
Written by: Diana Wynne Jones 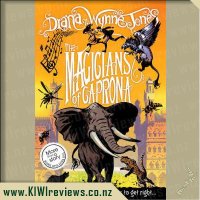 The Magicians of Caprona product reviews

The Dukedom of Caprona is a place where music is enchantment and spells are as slippery as spaghetti. The magical business is run by two families - the Montanas and the Petrocchis - and they are deadly rivals. So when all the spells start going wrong, they naturally blame each other. Chrestomanci suspects an evil enchanter; others say it is a White Devil. Or maybe a different kind of magic is needed to save Caprona!

Yet another book in the Chrestomanci series by Diana Wynne Jones, a copy of this was given to me for Christmas in 2002 and I still enjoy it today. This book strikes me as rather much of a Romeo and Juliet story, well, that is the big vibe of that here, and when you have two families who have been feuding for years and a boy from one family and a girl from the other disappear, so it's there, but there are lots of books and films out there with that vibe. In Caprona all magic starts to go awry and naturally they blame the other family but who is really causing it?

In Caprona spells and magic comes through music and singing, so if you aren't feeling it or able to get in to it then the magic doesn't work as well. A lot of the trying to figure and work things out comes from the children, not the adults, which not only makes sense as children aren't born with that deep seeded hate but for a book aimed at young adults, suits perfectly. The characters are well written and the ending isn't what you would expect when it comes to who saves what. Another great book by a great author.