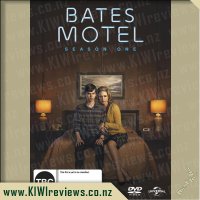 From the producers of Lost and Friday Night Lights comes a modern day prequel to the iconic horror film Psycho. After finding his father dead, teenager Norman Bates (Freddie Highmore, Charlie and the Chocolate Factory) and his mother, Norma (Academy Award nominee Vera Farmiga), purchase a motel and move to White Pine Bay in search of a new life, but they soon discover this idyllic seaside town hides some deadly secrets.

Unable to trust anyone but each other, the two indulge in a deeply twisted relationship that raises the question: does mother really know best? Watch every episode back-to-back and uninterrupted of the murderously suspenseful drama that tells the story behind one of the most iconic characters in movie history.

I've not yet seen Psycho, though it is still on my list of must see movies, but when I saw the ad for this on SoHo it looked interesting and so I quickly set it all up record so I wouldn't miss it.

Bates Motel is set in the present day yet is a prequel of sorts to Psycho and starts off with the death of Norman's father and him and his mother moving to the small town of White Pine Bay, Oregon where she buys a rundown motel. When Norma is attacked by the previous owner it sets off a chain of events including murder, evidence tampering and more. With an eye for an eye mentality of the town and the uncovering of some very nasty, illegal workings there is a lot going on as well as the relationship between mother and son and the various characters that inhabit this small town.

Vera Farmiga does an awesome job as Norma Bates, a woman who is pushed to do things she doesn't really want to, in order to cope and survive but who doesn't realize what is and isn't a good, normal, mother and son relationship. Freddie Highmore is really good as the socially awkward Norman Bates who is trying to be normal but is so caught in his mothers web that it is already easy to see the base for Psycho and indeed there is a little blurb at the end of each episode saying that the characters are based upon both the novel and the film.

I've really enjoyed the first season of Bates Motel and it had me hooked after the first episode, I'll be watching season two for sure.